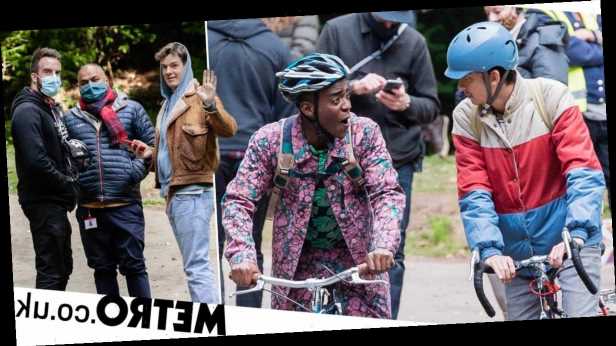 Sex Education stars have been spotted filming season three in Wales, which means we can officially get hyped to find out what happens next in the Netflix show.

Things all looked very familiar on set (aside from the coronavirus masks that the crew were sporting), with Asa Butterfield (Otis Milburn) and Ncuti Gatwa (Eric Effiong) bringing back their bikes for the gossip-filled rides to school.

The pals were seen chatting away as they rode their bikes, with Ncuti, 28, giving us a gleeful face that can only mean Eric’s still making fun of Otis at every opportunity.

While Otis seems to be experimenting with a moustache for the new series, Ncuti rocked a classic Eric look, in a co-ordinating pink patterned trouser and jacket combo.

Elsewhere, Connor Swindells (Adam Groff) was seen giving the camera a cheeky wave as he chatted away to crew members, with Asa, 23, getting a touch-up on his makeup.

Safety clearly came first on the production, with the crew donning coronavirus masks as they filmed and chatted away to the actors.

The Netflix show left us on quite the cliffhanger at the end of season two, but hopefully fans won’t have too long to wait to find out what happens next, after the cast confirmed filming had begun in September.

Sharing clips of themselves preparing for filming, we were blessed with a sneak preview, as Gillian Anderson, 52, who plays Jean Milburn, showed off her baby bump after it was revealed at the end of season two that her character is pregnant.

Asa was seen waving goodbye to his cats and donning a face mask to head off to filming, while Connor, 24, got ready for a costume fitting.

Meanwhile, Emma Mackey, who plays Maeve Wiley, has given us a few hints about what we can expect from the upcoming series.

The 24-year-old admitted the set has become ‘very regimented’, with coronavirus testing being carried out twice a week to ensure the cast and crew’s safety.

But don’t worry folks, all the raunchy sex scenes are still going down.

‘We’re all still, like, hugging and making out… and doing intimate scenes,’ she told PORTER.

And we could be set to see some new faces too, with Girls actress Jemima Kirke reportedly playing Moordale High’s new headteacher, taking over from Mr Groff (Alistair Petrie).

It’s been reported that she will move to Wales for six months for shooting, and has already chopped off her hair for a ‘smarter’ look.

‘The arrival of a sexy woman as head will sensationalise pupils who are more used to a stern middle-aged man running the show,’ an insider told The Sun.

Sex Education is available to stream on Netflix.

If you’ve got a celebrity story, video or pictures get in touch with the Metro.co.uk entertainment team by emailing us celebtips@metro.co.uk, calling 020 3615 2145 or by visiting our Submit Stuff page – we’d love to hear from you.