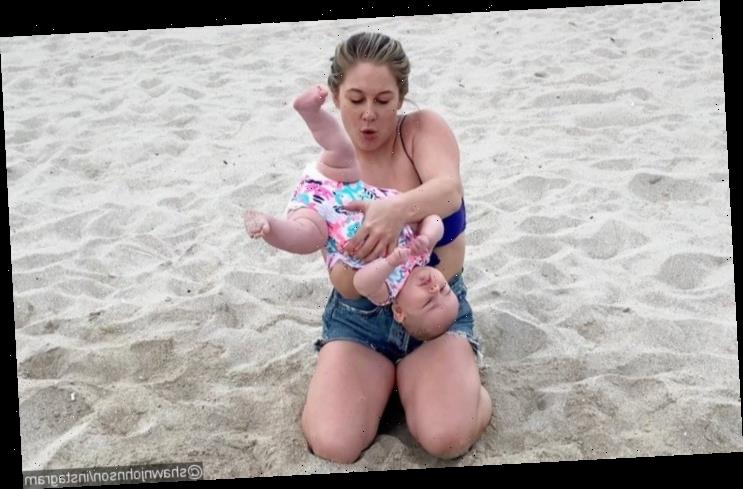 The Olympic gymnast was previously schooled by her Instagram followers after she shared an adorable video of her and husband Andrew East’s daughter Drew reaching her milestone.

AceShowbiz –Shawn Johnson is not letting Internet trolls get away easily. The former Olympic gold medalist found herself being subjected to criticism for giving her baby daughter her “first flip”, but was quick to put the mom-shamers in their place by reminding them mothers know best.

On Monday, February 3, the 28-year-old took to Instagram to share a footage from her Miami vacation with husband Andrew East and and their daughter Drew Hazel East. “Roo’s first flip!! @drewhazeleast (she was PERFECTLY safe… so don’t even haha),” the gold medalist noted in its caption.

The clip itself captured the moment Shawn slowly flipping 3-month-old Drew over while holding the baby by the waist. Following the successful flip, her husband Andrew came into the frame and gave their baby girl a big kiss for the milestone.

Despite Shawn’s warning, one internet user still offered an unsolicited comment about the clip. “While she may have been perfectly safe, sometimes you are a bit rough handling such a young baby, and not making her warm enough when you take her out,” wrote the critic. “She needs at least socks if not shoes, as well, and hats.”

A troll mom-shamed Shawn Johnson for being ‘rough’ with her baby girl.

It prompted Shawn to fire back at the parent police. “Are you holding her? Have you physically felt her sweat when she wears socks? Or felt her strength when she stands? Or seen her fuss until she stands up because she hates laying down,” she clapped back. “Nope. You haven’t. I’m her mama. I know.”

The former Olympic gold medalist clapped back to the hater.

The “Dancing with the Stars” alum further addressed the hate comment on her Instagram Story handle. “Those [comments] are not good, not nice or worth the effort. … All of us mamas are doing the best that we can. We’re trying, we’re crying, we’re pushing our way through it, so you guys should celebrate all of the mamas out there,” she pointed out.

“If you have advice, try to say it in a very kind way because, let’s be real, none of us know what in the heck we’re doing and we’re all just trying to figure it out,” the former artistic gymnast added. “Be kind. … Stop picking on our little babies, OK?”

Siding with Shawn on the matter was New Jersey pediatrician Dr. Jay Lovenheim. “If you watch the video, the baby holds her neck well, it’s not like Shawn was throwing her in the air. It’s all very controlled. It’s not rapid,” he told TODAY Parents. He further noted that Drew’s position was close to the ground, reasoning, “Even if she fell, she’d likely be just fine. She doesn’t appear to be in any danger.”