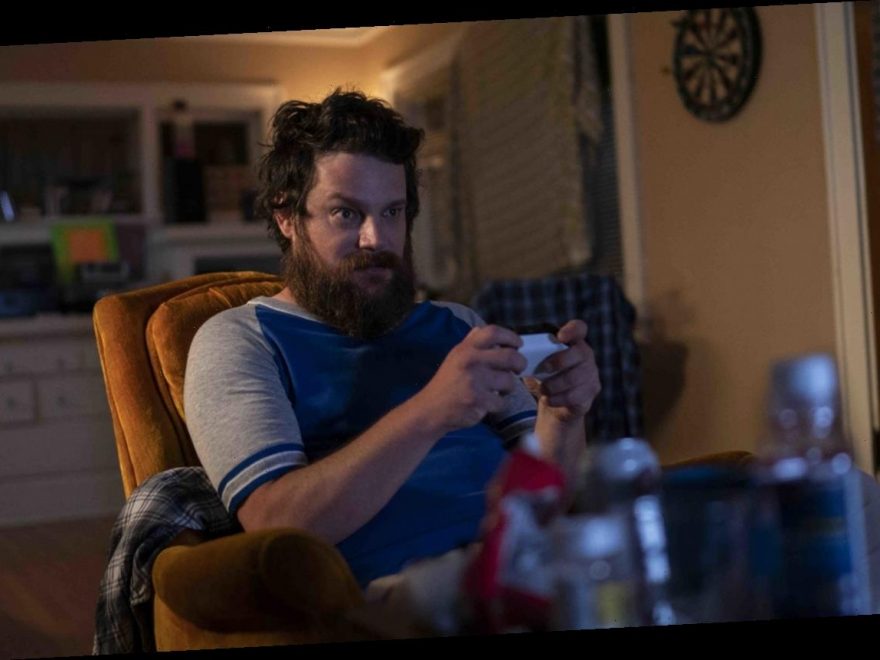 Shrill Season 2 is all about Annie Easton’s continuing journey of self-discovery. From embarking on a freelance writing career to diving into a committed relationship with her hookup-turned boyfriend Ryan (Luka Jones), the Hulu series’ sophomore season finds Annie (Aidy Bryant) taking ownership over her life choices, even when they turn out be extremely misguided ones. According to Shrill star Luka Jones, while his character Ryan may not truly be a match for Annie, his and Annie’s rocky relationship ultimately "help[s] her grow into herself."

Ryan is never quite on the same wavelength as Annie, and each of his chivalrous gestures is paired with an equally cringe-worthy misstep: He whisks her off to the forest to protect her from her internet troll, but fails to bring any camping gear. He’s gravely polite at a dinner with her parents, but also embarrassingly brings them used jackets as a gift.

While it appears that Ryan is making an effort to move beyond being the so-called Bare Minimum Boyfriend of Season 1, he’s also still so clearly out of sync with Annie’s wants and needs. Though Jones says Ryan is clearly giving the relationship a "deeper try" in Season 2, there’s only so much one can do to force a connection between two very different people.

"She’s got a guy who is explicitly committed to her and loves her, but as we all find out, that’s just the first step in figuring out if two people are actually right for each other," Jones tells Bustle.

"Ryan is so obviously a bonehead about what Annie needs. He just starts relying on this strategy of, ‘Just tell me what you want. Just tell me and I’ll do it,’" Jones says. "That gets unfulfilling after a while. You want somebody to get you. You want them to relate to what you need and what you want, and be like, ‘Yeah that’s like me! We’re the same! No wonder we’re in love!’"

While Jones says Ryan is definitely not trying to be a bad boyfriend, he notes that Annie needs someone who has more to offer: more ambition, more financial stability, and an emotional maturity that’s in line with her own. Fran’s brother Lamar, for example, or the soft-spoken Daily Thorn artist who introduces Annie to Sheila, are two people the show suggests are more on Annie’s level. Ryan, meanwhile, needs someone different too: perhaps someone who will prioritize burger-eating contests and pencil fight with him, if he really insists on never growing up.

"There’s multiple ways you can evaluate a partner. One is how much they’re giving what they can, truthfully and honestly, and another is maybe if how much they have to give is right for you," Jones says. "Ryan’s definitely not the perfect boyfriend for her, but I think if it just came down to trying and that was all, then he’d be a great boyfriend. I really do think he’s trying."

While it’s clear that Annie’s lack of self-confidence in relationships is what keeps her from being honest with Ryan, Jones points out that a being in a healthy relationship doesn’t mean simply deferring to your partner. Each relationship is an ongoing dialogue, and sometimes that means "challenging them if you need to … and asking, within reason, for what you want." As Shrill Season 2 tells us, there’s limits to how far simply being in love can take you sometimes, and their breakup in the season finale is as poignant as it is triumphant for Annie.

"I want an adult. I want a real partner," Annie tells Ryan. She admits that she avoided having this conversation because being with Ryan was "easier than f*cking facing putting myself out there, and having guys not even consider dating me because I’m fat." She harkens back to the "back fence" conversation, the first example of how Ryan, despite claiming to care about her, also never realized how fully disrespectful it was to make her exit his home by climbing over a fence in his backyard.

"I think Annie deserves to be in a relationship where she’s happier than she’s been with Ryan," Jones says. "I think what we found is they’re not right for each other … You know, she gives him plenty of chances, and it doesn’t work out."

Though Jones is sympathetic to Ryan, he says that the final breakup is completely earned. "It falls in line with the bigger story, which is not romantic, but personal," he says. "It’s her [saying], ‘I’m gonna keep taking swings in life, and stop being so small, purposely small, out of fear,’ which we can all relate to."