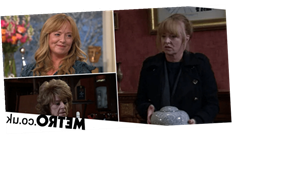 Coronation Street is about to drop its 10,000th episode and it looks like fans are in for a whole host of emotions.

When appearing on This Morning, Sally Ann Matthews who plays Jenny Bradley in the soap, teased what’s to come in the hour-long special.

And the 49-year-old didn’t hold back when revealing one particular scene that will get viewers sobbing.

Ruth Langsford asked if the actress could dish up any spoilers ahead of tonight’s installment, as she perched eagerly on the edge of her seat.

‘It’s wonderful,’ Sally confessed beaming ear-to-ear: ‘There are so many nods to the past. The opening scene is a massive throwback, but it pays homage to our history.’

She went onto revealed that six or seven storylines were all merged into the much-anticipated episode, with the main focus being on Rita (Barbara Knox).

‘I don’t know why Dennis wants to be scattered in Blackpool,’ she laughed referring to all the bad luck that goes on in the seaside town: ‘But, she takes on the responsibility.’

The star then admitted that Jenny gathers all the women of the cobbles to go with Rita on her journey, before adding: ‘We have another scene, near the end of the episode, where Barbara is just magnificent, it will bring a tear to your eye.

‘You will laugh, and smile, and you will be intrigued, and I think by the end of it, you will have a tear. It’s brilliant.’

Ruth was pretty much all of us after that reveal, as she gasped: ‘I’m dying to know what that twist is now.’

Sally Dynevor and Antony Cotton who will also appear in the landmark episode also teased some spoilers just hours before Sally Ann’s interview.

When appearing on Good Morning Britain the actors teased their involvement in tonight’s special.

‘It was lovely to do,’ the Sean Tully actor confirmed. ‘In the coach scenes, there’s lots of us in it. It was nice for us all to be together, those episodes are always beautiful.’

Sally Metcalfe herself also announced to those watching that tonight’s ep will contain a massive twist.

‘There’s a bit of a surprise at the end,’ the actress teased. ‘When I read the end of the script I gasped.’