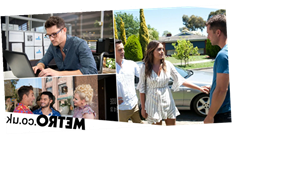 It’s a woeful week for our Neighbours as Jane Harris (Annie Jones) searches for the identity of her ‘catfish’ and Finn Kelly (Rob Mills) battles against his own mind.

Jane has been left devastated by the trickster, but she’s yet to work out who is behind it. A little more super-sleuthing and she thinks she might have cracked it. It can’t be…can it?

Finn is battling his biggest demon – himself. It looks like his evil side is making its return. Can he stop it, or will he succumb to his own dark side?

Gary (Damien Richardson) is back and has a shocker of a secret to tell. What will Sheila (Colette Mann) say?!)

And there are some big returns to Ramsay Street this week, including Paige (Olympia Valance). But why is she back? She’s hiding something, and Terese (Rebekah Elmaloglou) takes it upon herself to find out what’s going on.

Here’s what’s ahead this week in Neighbours…

Jane is red faced after mistakenly believing school by Richie to be her catfish, having also handed over a rather huge sum of money to her online lover. She is desperate to get to the bottom of whoever is behind her cruel prank. She spots Elly shopping in an expensive baby store and her mind starts putting two and two together, she remembers Elly’s sharp tongue from last week. Could she be behind it all?

2. Evil Finn is set to return

Finn is thrilled to be asked by Toadie to take over from Terese at the Foundation, but Susan thinks it’s a distraction from the fact he’s not coping. And when he has another moment of déjà vu it becomes clear his mind is starting to crumble again. Later, during a conversation with a distraught Harlow, Finn is triggered again, causing Lucy to ban him from the expo.

Later, he is sent fleeing from No. 32 when he’s hit with a huge wave of memories; from South America, from his time in Erinsborough, it’s all flooding back and he’s struck by a splitting headache. He tells the Kennedys he feels ill and they buy his excuse, but really he knows what is happening – his evil self is coming back…

Gary is back in town and while most people are excited to see him return, Sheila is hurt he’d up and leave in such a manner. Kyle tries to cover the real reason for his trip, he’s hiding a big secret about Prue. How will the family react when they find out the truth?

Two Ramsay Street favourites from the old days, Lucy Robinson and Mark Gottlieb happen to be back in town at the same time. What are the chances? Back in the day they were old flames and had a serious crush on each other but it just wasn’t meant to be, and Mark left in 1995. All these years later, could they finally have the chance at romance?

5. Aaron and David get Court in the Act

While the Erinsborough lot celebrate Mardi Gras back at home, Aaron and David are out living life to the full in Sydney, and while they’re galavanting around town they come across some famous faces. During their trip they manage to bump into Mick Allsop, Jake Sheers from the Scissor Sisters and Courtney Act!

6. Paige and Jack are back…but why?

Roxy discovers someone trying to burgle the house so she tackles them, only for Terese to discover it’s Paige! She’s back and she’s being shifty, so it takes some digging for Terese to learn it’s because she and Jack are heading for Splitsville. Terese is heartbroken for her and decides to get involved, secretly calling Jack into town to try to fix this mess. But before he goes to see Paige Jack makes a stop off to visit a former local – Mark Gottlieb. His shifty behaviour makes Paige believe he’s having an affair. What is he really up to and how does Jack know Mark?