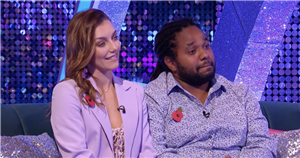 Strictly Come Dancing professional dancer Jowita Przystał was left worried for her celebrity partner after he injured his knees dancing live on the BBC show.

Jowita and Hamza Yassin appeared on spin-off show It Takes Two this week to discuss their routine, which left Hamza in agony.

Ready to gush over her co-star, Jowita told host Janette Manrara: "Can we say about his death drop in the end? I was thinking something was wrong, actually! He really went for it."

READ MORE:Strictly's Jowita 'worried' for Hamza after injury as she gushes over 'cute' co-star

The pair then confirmed that they hadn't practiced the drop even once, with Hamza explaining: "There was no practice. My knees are hurting – I was meant to fall forwards, but my knees are bad."

Jowita added: "We decided to fall on the side, but then Hamza was like, 'You know what, I'll give you the best drop and fall ever, but don't make me do it on the rehearsals!' So I trusted him."

Worried, Janette asked: "Are you still in pain?" as Hamza explained: "Oh, no, just my knees – I'm getting old!"

Shortly after, pro dancer Jowita was left gushing over her partner as she branded him "so cute" after giggling over his serious dance face.

"I mean, look at him!" she exclaimed. "Every time he pulls an angry face, you can't, because you know deep inside he's smiling so much! The first time he showed me his serious face, I just couldn't because he's just so cute!"

Taking to Twitter, fans of the show were in agreement – with one comparing Hamza to an adorable puppy.

Someone else gushed: "Hamza's death drop was incredible though!"

As a third penned: "Hamza and Jowita just give me great vibes." Later on the show, Will Mellor confessed he was "terrified" performing for Halloween week as a mummy.

Commenting on the scores from the judges, the Coronation Street actor said: "At the end of the day, I can't do nothing about the scores. All I can do is go out there, I do the dance and if I get it right I'm over the moon!

"So whatever the scores are, I go, 'Okay, you know what you're talking about. I ain't got a clue!'

"And if they give me any notes I take it on board."

It Takes Two airs weeknights from 6:30pm on BBC One.