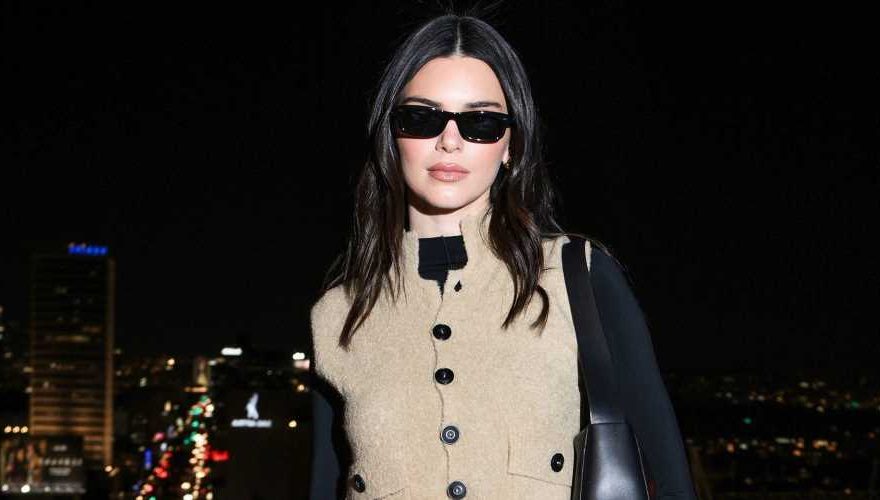 Celebrities aren't really wearing pants right now, even though it is peak cover-your-legs season (known formally to most as winter). Dua Lipa recently posed in fuzzy Hello Kitty moon boots and a bikini. Rihanna wore a purple metallic extremely mini miniskirt while out in New York, where the windchill has recently made it feel as cold as 10 degrees Fahrenheit. And yesterday in Los Angeles, Kendall Jenner twinned with Hailey Bieber in a leather look, but while Bieber opted for a long black Magda Butrym trench, Jenner wore our favorite Amal Clooney-inspired boot trend with a small leather skirt.

To be fair, who needs pants when you can just cover your legs partially with a really, really good pair of knee-high black leather boots? It's a classic Amal Clooney staple, and recently Emily Ratajkowski did the same. Granted, she did pair her knee-high boots with tights and a fuzzy Emma Brewin leopard hat. Then again, she was in London, while Jenner was in Los Angeles.

Regardless of the outfit or the season, black knee-high boots are just it. And right now at Nordstrom, a handful of options are on sale  for $150 and under. There's even a great Steve Madden boot that looks similar to Jenner's for only $90.But if you do want to spend as much as Jenner likely did, there are some high-fashion options that are on our wishlist, too. Namely the Prada Monolith knee-high boot  (which comes complete with Prada coin purse attached), the Bottega 'It' boot of the season, and these on-sale Marni boots that have a zipper to transfer the shoe into an ankle boot. You can't go wrong with any of these choices — just don't forget to pair your tallest boot with your shortest skirt for the supermodel go-to outfit formula of the season.