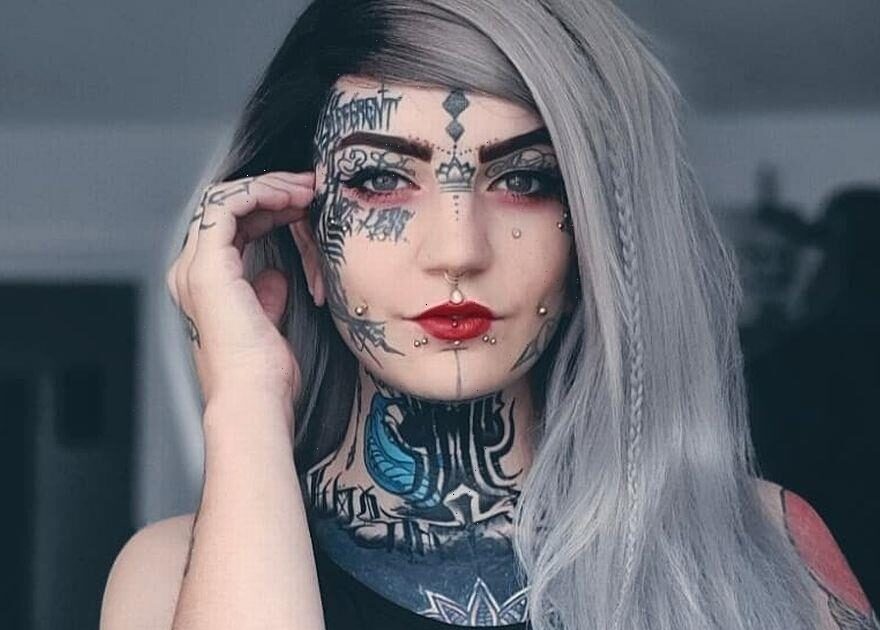 A young mum-of-three who covered her face in tattoos revealed how she looked without her extreme ink.

Aimee Smith shared the photo on her TikTok page with the words "my younger self would be so proud of me now".

She then told Daily Star she only learned to express herself after embracing body art.

The 23-year-old got her first inking aged 13 but has gone on to get over 40 tattoos – including sentimental ones dedicated to her children.

Now, speaking about her journey, the alternative model said: “I was about 13 or 14 in the photo and it was about the time when I first started to explore an alternative style.

“It’s odd looking at that photo. I had dyed my hair and I was wearing eyeliner which was as far as I had got with my exploring really.

Aimee, now known in her community as “the girl with the tattoos,” also said she wasn’t comfortable in her own skin as a teenager.

But her creative side was sparked while watching episodes of Miami Ink after school from her home in Oakham, East Mids.

She soon started to take an interest in people with tattoos and Aimee said: “I remember at that age I would walk past heavily tattooed people and I would think, wow, they look amazing’.

“I really appreciated what they had done. And to grow up and fit in with the tattoo community considering how I looked up to them when I was younger is just amazing.”

The TikToker, who was gifted a tattoo machine as a teenager before practicing on her leg, continued: “I would have been really shocked if someone had shown me a photo of how I am now when I was that age. I would have been so shocked.

“I would never have thought I would have that amount of followers that I do now and all the opportunities I’ve had.”

Aimee now has 34,000 followers on Instagram and her tattoos have been broadcast in publications all over the world.

But despite the positives, she has been targeted by trolls who accused her of “destroying” her body.

Speaking about the tasteless comments, she said: “There was an article and the majority of comments were not very nice.

“There were a lot of people saying I had destroyed myself. I can’t even count the amount of comments of people telling me I was ugly.

“There were a lot of people with different beliefs and they were saying my choice of lifestyle was in line with the Devil and such.

“It’s quite… it does get to you. They were probably the worst comments I’ve had so far. Had I made those comments about someone it would have been seen as bullying.

“It was shocking to see the amount of people who thought just because I had tattoos it was OK to make those remarks.

“At the end of the day it’s my body and I’ve done what I’ve done because I love myself more now than I did five or six years ago. I put my makeup on and I dye my hair or get a new tattoo and I am happy doing what I am doing.”

Aimee described the process of getting tattooed as therapeutic and her next inkling will be dedicated to her kids after she recently gave birth to her third child.

But despite usually enjoying getting body art added, she said one tattoo was excruciatingly painful, almost pushing her over the edge.

The sore needle session did not involve her face and instead was a tribal design extending from her collarbone to her chin.

Remembering it, she said: “Surprisingly that was the worst. It was a really long sitting and towards the end the pain was excruciating to the point where my eyes were watering and I had to stop. It wasn’t a massive piece but it was a sitting that took its toll on me.

“Arms and legs are more fatty areas but the way you have to position your throat back, after a while being uncomfortable really kicks in with the pain as well.

“The pressure too because you’re constantly wanting to cough when having it done or you have to swallow. It’s not as straightforward as a normal tattoo where you can sit there without needing a break or have to move.”