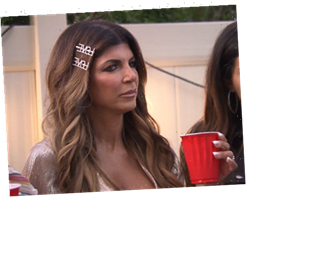 As per usual, it was an intense season for the cast of the Real Housewives of New Jersey.

Not only did Teresa Giudice tell her husband Joe that their marriage was effectively over, but she was also recently confronted about her involvement in the violent incident where Danielle Staub attacked Margaret Josephs when she pulled her hair at a boutique.

Teresa and Danielle are no longer friends due to the aftermath of the catfight, but Teresa wants everyone to know that she had no part in the classless act.

Teresa is reportedly ‘upset’ with the RHONJ producers after airing a clip that made it seem as though Teresa encouraged Danielle to pull Margaret’s hair.

TBH, I wish my life was a reality show so every time I made a mistake I could just blame it on a cameraman. How dare you, Jeff!

But it’s not just the production team Teresa has an issue with here.

“Danielle claiming that Teresa told her to pull Margaret’s hair is the very thing that ended their friendship and Teresa feels like it all got taken the wrong way,” a source recently spilled to HollywoodLife.

“She doesn’t see them being friends ever again. She felt after the table flip and they moved past that, that they’d always be friends, but she really stands by the fact that the way Danielle is telling the story is not what happened.”

And even though there is literal footage, Teresa is still sticking to her truth.

“She’s aware there is footage and it’s been seen by fans, but she feels the footage that came out and what actually happened are two different stories, as she feels like she wasn’t even paying attention to Danielle and their conversation about hair-pulling,” said the source.

However, Teresa defended herself in the original clip by saying she was “drinking” and that “everything happened so fast.” Oh yeah, and by throwing that unforgettable tantrum that would have a 4-year-old beat.

So, was she too drunk to remember or just not paying attention? Either way, she wasn’t happy with how the producers made her look.

“She never thought it would turn into what it did. She honestly doesn’t even remember it happening and feels set up and upset by production over this.”

“Teresa would never physically assault anyone,” the source continued.

“Teresa finally saw what the other ladies have been saying about Danielle, and it seems a lot of them do believe that it didn’t go down how Danielle says it did, either.”

Unseen RHONJ footage aired on Wednesday, Feb. 19 and showed Giudice urging Danielle to pull Margaret’s hair which quickly became one of the most controversial scandals on the Bravo show.

At the end of the day, it’s all he-said-she-said. And attacking someone (yes, especially hair pulling!) is never the answer.

Teresa Giudice FLIPS the Eff OUT Over Joe’s Deportation!Start Gallery