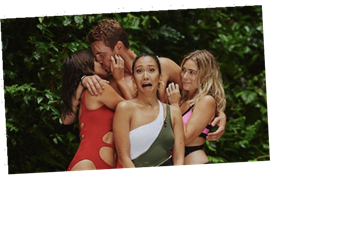 SPOILER ALERT: Do not read if you have not yet watched the fifth episode of “The Bachelor” Season 24.

Monday night brought us the first of five (!!!) hours of “Bachelor” related content this week, where viewers picked up from the Alayah Benavidez controversy of last week’s “To Be Continued…”

In the wise words of contestant Natasha Parker: “She has made her bed, and now she has to A-layah in it.” And just like that, Benavidez was sent home by bachelor Peter Weber. She was not the only contestant sent home, as Deandra Kanu, Savannah Mullins and Kiarra Norman joined her exit.

After Weber spent his time reassuring his remaining women, he announced that they were headed to their next destination: Costa Rica.

The women settled into their new digs and made sure to yell “Costa Rica!” in unison from the balcony before Weber arrived with 22 stitches. News broke earlier this year that production had temporarily been halted as the franchise’s leading man was taken to the hospital after a golf cart accident.

However, back and bandaged, Weber was ready to jump into his first date of the week, where he went flying over the country and hosted a romantic picnic with Sydney Hightower.

The two spent much of their date talking about their mixed ethnicities — something not traditionally aired on the franchise. Weber’s mother is Cuban and father is German, while Hightower’s mom is white and dad is African American and Dominican. Later in the date, she revealed that she was the target of racial slurs and vandalism growing up in the rural south, and spent much of her childhood being raised exclusively by her mother. Weber, emotional from her story, rewarded her with the rose.

The two quickly reverted to tradition and finished their date by making out.

“You are the best kisser,” he told her. “That’s our secret. Don’t tell anyone. I don’t want to piss everyone else off.”

On the group date, the ladies joined Cosmopolitan editor Jessica Pels and photographer Tyler Joe on a photoshoot competition for a swimsuit feature. Fuller won the competition, securing herself as a digital cover for Cosmo (however, an hour into the episode, Cosmopolitan released a statement announcing that they were pulling the cover after evidence has surfaced that she had modeled for the Marlin Lives Matter organization whose official slogan was “White Lives Matter.”) The others — especially Weier — watched jealously from afar.

Earlier, Weier revealed her struggles in the competition: “I’ll never be okay with [him dating other people],” she confessed, before diverting on a tangent slamming the other women. Her comments were resurrected on the group date, when Ly confessed to Weber some of the red flags she saw in her behavior.

“This is the second example — first, with Alayah ­– and red flags,” Weber confessed. “And now, a possible red flag with Kelsey. This is really difficult to gauge what’s too much of a red flag and what’s not for me.”

Peter ultimately chose to go the safe route, and gave the rose to Sluss.

The next day, Flanagan and Weber had their first one-on-one, where they went through a spiritual guidance based on Jupiter’s energy. The readings revealed that he was more invested than Flanagan, a sentiment that they both echoed in their confessionals.

“It’s very well know that I’ve been like hiding in my corner,” she said, “It’s not necessarily my fault; it’s just this process and journey that we’re in. It’s not easy to just be like, ‘Here’s my all.’”

While the two met pre-show, he confessed that he felt like they had plateaued since their first few weeks together. “I can’t keep making excuses,” he said.

Looking for affirmation, he asked Flanagan how she evaluated their relationship.

“Right now, our relationship clearly isn’t in the place where I’d be comfortable with [an engagement],” she said. “I don’t necessarily know how the process goes from here. I want someone to be my other half, I want to be with someone where we’re a power couple, I want someone to challenge me on a day to day, and me challenge them, and vise versa.”

Weber was uplifted enough in her remarks to reward her with the rose.

The next morning, the Ly vs. Weier showdown continued, and Weier went straight to Weber to address the situation head-on. He dismissed Ly’s accusations of alcoholism and reaffirmed Weir that what they have is strong. He said he doesn’t need a rose ceremony to decide their future, and handed her a rose right then and there.

The women were angry upon her return, as they were all dressed and ready for the scheduled rose ceremony. Chris Harrison announced that they’ll be skipping the cocktail party, and it turned into a confrontation circle, where contestants took turns airing their grievances.

Dorn cried at Weier for getting the party canceled; Weier confronted Ly for starting rumors of her taking pills (“I take Adderall and birth control,” she cleared up); Buchanan confronted Ly for spreading gossip; Ly asked Paul about why she’s taking pills; Hightower and Ly screamed at each other for talking about Benavidez. Then Sluss chimed in is in the background: “Is someone yelling?”

Before the rose ceremony started, Ly interrupts Weber to pull him aside. “I would hope you’d know that I was never coming from a malicious place.”