Early in Les Blank’s 1982 documentary “Burden of Dreams,” director-turned-subject Werner Herzog explains why he feels obligated to see a difficult production through to the end.

“It’s not only my dreams,” Herzog says about the movies he makes. “My belief is that all these dreams are yours as well, and the only distinction between me and you is that I can articulate them. That is what poetry or painting or literature or filmmaking is all about. […] It is my duty because this might be the inner chronicle of what we are. We have to articulate ourselves — otherwise, we would be cows in the field.”

Few explanations come closer to defining the continued wonder evoked by “Documentary Now!,” IFC’s seven-year-old comedy series that returns for a fourth season Wednesday night. Comprised of loving parodies of famous (or infamous) documentaries, Fred Armisen, Bill Hader, Seth Meyers, and Rhys Thomas’ creation has long felt too niche to exist. A TV show that spoofs a different documentary every episode? And the docs aren’t even current, but often decades old, subtitled, and filled with obscure references — references that don’t just shape the basic story, but also mimic formal approaches like narrowed aspect ratios, grainy footage, and era appropriate yet indecipherable accents? Who is going to watch this?!

Film nerds, my friend. Film nerds and comedy fans. After four seasons — including two three-year breaks between the latest entries — it’s clear Armisen, Hader, Meyers, and Thomas have tapped into dreams beyond their own. By now, each send-up isn’t met with confused skepticism, but lofty expectations. From the unforgettable series premiere (starring Armisen and Hader as “Grey Gardens” stand-ins) to Season 3’s finale (co-written and co-starring the one-and-only Tim Robinson), “Documentary Now!” has maintained a high-bar for humor and homage, and in tackling one of the most notorious film shoots ever chronicled by a documentary team — Herzog’s famously troubled production of “Fitzcarraldo” — the Season 4 premiere has realized a vision worthy of the lore it lampoons.

Returning for her 53rd season as host of “Documentary Now!”, Helen Mirren introduces “Soldier of Illusion,” an early 1980s documentary following visionary German filmmaker Rainier Wolz (Alexander Skarsgård) as he embarks on his “magnum opus.” At the base of Russia’s Ular mountains, film crew in tow, Rainier sets out to chronicle the lives of the Dushkir people — sheepherders who are preparing for breeding season. Undeterred by the frigid gusts and soggy climate, Rainier lives among the Dushkir natives for several months, building trust and gathering footage for his passion project.

The setup, of course, mirrors Herzog’s journey to Peru for “Fitzcarraldo,” where he befriended the Aguaruna people, cast them as extras in the film, and hired skilled workers to help construct sets. Rainier follows in similar footsteps, but his Sisyphean task is less of a direct parallel to Herzog dragging a ship over a mountain — and thus, a better joke. Rainier has agreed to shoot not one project, but two (a decision he chalks up to the “vinegar of the pompous” running through his veins.) While filming his documentary, Rainier will also showrun the CBS sitcom pilot, “Bachelor Nanny.”

The natural follow-up — “But… why?” — isn’t worth getting into. It’s far better to hear Rainier describe his relationship to each project, as well as their relationship to each other, for yourself. Skarsgård — who’s long been a talented comedian, as anyone who’s seen “On Becoming a God in Central Florida” well knows, strikes the right balance between requisite impersonation and casual embodiment. His heavy vowel sounds quickly call to mind Herzog’s oft-imitated intonations, but he offsets a voice that can quickly turn cartoonish with the workmanlike demeanor of a man in turns driven by his trade or worn out by its demands. The actor earns equal laughs for repeating silly words like “pee pee, poo poo” as he does for frustratedly dismissing the indigenous sheep as “little morons.” 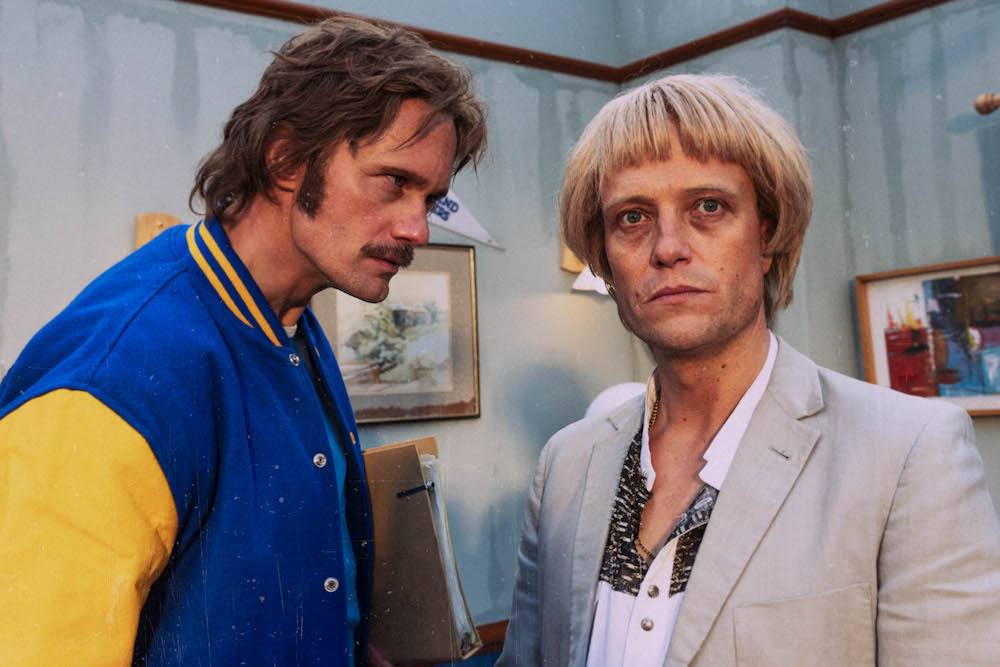 In other words, it’s not just an impression of the Herzog myth, but a blend of the Herzog seen in “Burden of Dreams” and the Rainier we meet here, who warms up the live “studio” audience by reading names of crew members who’ve “died from exposure.” “Soldier of Illusion” features innumerable highlights, and Skarsgård is chief among them. The conviction he brings to reading stage directions makes simple scenes spring to life, as does the pitch-perfect casting of Nicholas Braun as former child star Kevin Butterman — an eternal optimist clapping and skipping as he hikes the rocky, desolate trail to his doomed comeback bid. By the time Klaus Kinski, er, Dieter Daimler (August Diehl) shows up — as a last-minute replacement for a much more audience friendly (and generally friendly) sitcom lead — all you can do is thank the gods “Documentary Now!” had the good sense to make its “Fitzcarraldo” spoof an hourlong episode.

The rest of Season 4 proves just as rewarding. Cate Blanchett bolsters her Oscar bid for “Tár” with an endearing, all-out turn in Episode 3 as a dotty hairdresser working alongside the great Harriet Walter. (Perhaps I’m just a sucker for kindhearted fare, but Blanchett’s full-tilt comic turn is worthy of a seasons-spanning sitcom of its own.) Episode 4 draws a delightful yet pointed analogy for boxing in its “When We Were Kings” mockumentary, while Episode 5 delivers a rather direct critique of Netflix’s Oscar-winning (yet critically divisive) “My Octopus Teacher.”

Describing anything more would be superfluous. “Documentary Now!” either grabs hold of you or drifts by in the distance, and for those of us who enjoy its esoteric Easter egg hunts or simply feel seen by the series’ very particular reveries, it’s best to savor each moment as they appear. But it’s worth remembering these dreams aren’t imagined or experienced in isolation; they’re shared, and thus worth the effort of articulating them. Herzog, I think, would be proud.