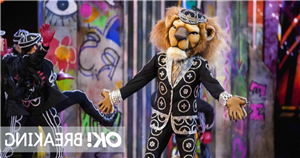 Tonight's final of The Masked Dancer saw Scissors, Onomatopoeia and Pearly King go head-to-head to be crowned this season's winner.

After the trio made it the very end, panellists Oti Mabuse, Davina McCall, Peter Crouch and guest panellists John Bishop and Dawn French, first announced third place before a dance-off between Scissors and Onomatopoeia chose the winner.

Following their respective dances the the studio audience voted for the winner, picking Scissors.

Pearly King was unveiled first with Bruno chatting to host Joel Dommet about his noticeable London east end accent, which he dropped for his appearance on the show in an attempt to throw off the judges.

He added that he chose the character Pearly King for the "swag."

Next to be unmasked was Onomatopoeia, who was revealed to be Adam Garcia

The actor joked that the judging panel guessed him due to his iconic tap dancing.

As host Joel Dommett revealed there had been a Girls Aloud nod in every single clue package, Kimberley, 40, said: “I did this for my kids, they love this show. They have no idea."

She continued: "I had to pick Odd Socks, I’m a mum of three boys, that’s my life.”

And prior to that Ketchup had been revealed as chat show host Steph McGovern.

Talking about taking part, Steph, 40, said: "I love the show and I love dancing. Getting to dance as a completely different person/character is thrilling!"

Speaking about being Tomato Sauce, the star added: "I loved it. From the moment I saw the costume/mask I loved it. I don’t think anyone pictures me as being cute or saucy, so it was the perfect disguise."

This series also saw Gareth Malone as revealed as Cactus, Stacey Dooley as Prawn Cocktail and David Seaman and Frankie Poultney as Pillar & Post, who sadly had to withdraw from the competition.