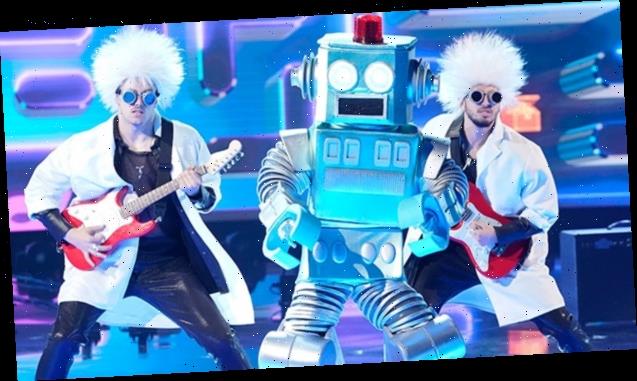 ‘The Masked Singer’ is back! The third season premiered after the 2020 Super Bowl and all-new celebrity contestants performed. At the end of the night, the Robot was unmasked!

Less than 2 months after The Masked Singer season 2 finale, the hit series returned for season 3. In their post-Super Bowl premiere, Jamie Foxx joins the celebrity panelists as 6 masked singers perform. The masked singers performing tonight include the White Tiger, Turtle, Miss Monster, Llama, Robot, and Kangaroo. The White Tiger is up first. He says that he’s “sought out perfection” his entire life and has had a “giant career full of accomplishments.” In his clue video, he reveals that he was crowned the “ultimate champion” for clam-shucking. The White Tiger is also incredibly tall so he is likely an athlete. He performs “Ice Ice Baby” by Vanilla Ice. Ken Jeong is convinced that the White Tiger is John Cena because of the Boston hints, while Jamie picks Rob Gronkowski. Nicole Scherzinger goes out on a limb and guesses Jason Momoa.

Next up is the Turtle. His clue video starts out on a track, so he’s possibly a runner. He also reveals a surfboard and grill in his package. He performs an awesome rendition of “Kiss From A Rose” by Seal. Robin Thicke guesses Joey McIntyre because of a possible New Kids on the Block clue in the Turtle’s package. Ken thinks the Turtle is Donnie Wahlberg, but Jenny McCarthy assures Ken that the Turtle isn’t Donnie. Nicole guesses Zac Efron.

The Llama’s clue video reveals that he could be a famous radio host. Apparently, people call him a “joker.” There’s also a Sounds of Seattle record shown in his package. The Llama performs Ricky Martin’s “She Bangs.” Robin guesses Joel McHale and Ken agrees because Joel is from Seattle. Nick Cannon throws Howard Stern’s name out there as a guess, while Nicole picks David Spade.

The Monster showed up in the first season but now it’s time for Miss Monster to make her grand entrance. Miss Monster admits she’s been “misunderstood” and she’s ready to “set the record straight.” She performs Bonnie Raitt’s “Something To Talk About” and the Monster shows up! Ken thinks that Miss Monster could be Dolly Parton because she sounds “very southern.” Jenny guesses Mary J. Blige. Nicole is convinced that Miss Monster is a legendary diva, possibly Dionne Warwick, and Jamie agrees with her.

The Robot is next. He admits that he has come across as “inhuman” at times and has been “stunted by potential.” He adds, “I really do have a heart.” He sings Lenny Kravitz’s “Are You Gonna Go My Way.” Because of the stunts clue in the Robot’s package, Jenny thinks the Robot could be Johnny Knoxville. Jamie believes that the Robot is someone from the Jackass family but thinks he’s Steve-O. Nicole is picking up on the boxer clues and guesses Floyd Mayweather.

The final performer of the night is the Kangaroo. She says that she’s a “survivor” and recently lost someone “who held my family’s heart together.” Something that she did put her in the spotlight “for all the wrong reasons.” She wants to “fight for my family and prove that bullies never win.” The Kangaroo wows with her rendition of Robyn’s “Dancing On My Own.” The guesses include Jordin Sparks, Kelly Rowland, and Iggy Azalea.

The first masked singer of season 3 going home is… the ROBOT! The final guesses include Floyd Mayweather, Johnny Knoxville, Shaun White, and Flavor Flav. The Robot is revealed as…LIL WAYNE! The panelists are absolutely blown away, with Robin saying that this is the “most shocked” he’s ever been on this show.