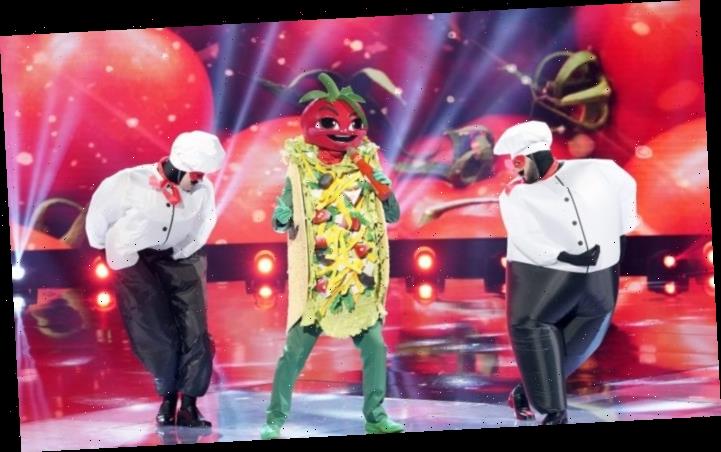 SPOILER ALERT: Do not read ahead if you have not watched Season 3, episode 6 of “The Masked Singer,” which aired March 4 on Fox.

Bergeron, who performed “Can’t Help Myself” by the Four Tops in the episode, called the experience “bizarre” but “wonderful.” “I think I lasted about as long as I deserve to,” he told Variety. “Maybe one or two would have been OK, but I had no delusions about going the distance.”

If anything, Bergeron admitted that he was a bit shocked that he lasted longer than last week’s eliminated celebrity, Dionne Warwick. “That stunned the hell out of me,” he said.

Bergeron’s exit this season follows Lil Wayne, Drew Carey, Chaka Khan, Tony Hawk, and Warwick. But unlike last week, when most of the panel figured out Warwick, they were completely in the dark on Bergeron.

“I was very surprised, especially given that Nicole won ‘Dancing with the Stars,’ Robin has performed a number of times on ‘Dancing with the Stars’ as a guest artist, and Jenny and I have known each other for years,” Bergeron said. “The only one of the regular judges I didn’t really know was Ken, so I expected one of the other three to at least guess at one point, but they didn’t.”

Perhaps the closest came when Thicke guessed Bob Saget as the Taco in a previous episode. Saget, a fellow former host of “America’s Funniest Home Videos,” was the secret guest who appeared in this episode to talk about the Taco.

“We’ve been friends for years and he readily agreed to do it,” Bergeron said.

Bergeron was recruited to join “The Masked Singer” by showrunner Izzie Pick Ibarra, who previously served as an executive producer on “Dancing with the Stars.” “She saw I had done a song for a Mr. Rogers tribute album and asked if I’d be interested, and I thought, this could be fun. And it was.”

For his first two songs, Bergeron performed “Fly Me to the Moon,” by Frank Sinatra, and “Bossa Nova Baby,” by Elvis Presley. Bergeron said he was happy with his Sinatra number, but was so worried about forgetting the Elvis lyrics that he forgot his dance steps.

“I described it as a ‘Taco-Franken-Elvis’ making his way across the stage,” he said. As for the taco outfit, Bergeron revealed that the hot sauce-style microphone he held was a prop.

“I actually had a mic under my tomato head,” he said. “But to try and move in the darn thing, there’s no peripheral vision, you have people guiding you backstage all the time.”

“The Masked Singer” is shot at CBS Television City, where “Dancing with the Stars” is also produced — and they even use the same stage. As a result, a lot of the crew members he’s worked with over the years on “Dancing,” including the director, lighting director and others in the booth, are also on “Masked Singer.”

So as a gag, Pick Ibarra put a camera in the control room to catch their reaction when he was revealed. “None of them had guessed either,” he said. “And their reaction was hilarious, when they realized it was somebody they had worked with for years and they still didn’t figure it out.”

“It was such fun, and it’s a great group of people,” Bergeron said. “Once I was finally able to take the mask off it was a wonderful reunion with quite a few people I had worked with over the years. I’m looking forward to seeing if I can figure out who the rest of Group B is, and who Group C is as well.”

“The stage is like my second home, and I’m having a ball up there,” the Mouse said in the pre-taped package before her performance. “So I feel more determined than ever to stay anonymouse. But when I leave my good job in the city, there’s no place like my home squeak home. You think I ought to take a break. But I still have more stories to tell. And why quit something that still feels exciting and new? I truly cherish my rare time off to catch up on my favorite things. Starting a good romance novel, a little needlepoint — my secret talent — and a little wine and cheese to bond with my friends like you. Thanks for stopping by my mousepad. But now it’s time for this hostess with the mostest to get her game face on. Because there ain’t no stopping me now.”

With the Elephant (Hawk), Mouse (Warwick) and Taco (Bergeron) now gone, that leaves Frog, Kitty and Banana moving on to the “Super Nine” face-off on the show. But first, the Group C contestants will begin their portion of the competition next week.

Here’s a recap of the other contestants and their performances on Wednesday:

Song: “Mama’s Broken Heart,” by Miranda Lambert
Voice-over: “Last time, I wore my heart on my fur. And the panel loved it. Speaking of people who love me for me, my BFF is here to dish out some kitty gossip.”
Kitty’s BFF: “I’ve known Kitty since we were little kittens. She didn’t have a ton of friends and got bullied at school for being weird. But to me, that’s always made her special. Whether she’s writing poems or directing horror movies we would star in, she’s always had a flair for the dramatic. I’ll never forget that one day in class, she said she could see ghosts, and scared one girl so badly , Kitty got detention. She may have the voice of an angel, but it’s her dark side that will help her slay the competition.”
Panel guesses: Christina Ricci, Kristen Bell, Haylie Duff
Previous songs: “Dangerous Woman,” by Ariana Grande; “Mercy,” by Brett Young
Previous panel guesses: Julianne Hough, Paris Hilton, Nicole Richie, Millie Bobby Brown, Amanda Seyfried, Sarah Hyland

Song: “Lean on Me,” by Bill Withers
Voice-over: “I’m loving performing as the Banana. But last week, I had a little setback. My memory’s not what it used to be, but I’m a real driven banana. Don’t believe me? Ask these two lovely ladies.”
Banana’s daughters: “He’s such a great role model. When we were younger, Banana actually taught us how to drive by getting us go-carts. He decided to build a racetrack in our backyard. He dug up all the bushes himself, anything to make us smile. He’s been through a lot of heartburn in his life, but he’s always been able to laugh through everything.”
Why that song?: “My father is like my best friend and he recently passed away. This man was a true hero and this song was our jam.”
Panel guesses: Mario Andretti, Brad Paisley, Larry the Cable Guy, Johnny Knoxville
Previous songs: “A Little Less Conversation,” by Elvis Presley; “Achy Breaky Heart,” by Billy Ray Cyrus
Previous panel guesses: Bill Engvall, Ed Helms, Darius Rucker, Larry the Cable Guy, Billy Bob Thornton

Song: “You Dropped a Bomb on Me,” by the Gap Band
Voice-over: “Being on that stage has been unusual. But I’ve been loving every second. And I’m too ribbit to quit. Makes me think backwards, to when my career jumpstarted and a woman that was so instrumental but barely seen.”
Frog’s team member: “I’ve known Frog since he was a tadpole. I knew immediately he’d be a super star. I looked out for him when he was in L.A. Uh-huh, even then he had an entourage. I remember taking him to his first late-night talk show. It was way past his bedtime, but I let it slide. He was cool, calm and collected, way beyond his years. But I’m most impressed with the man Frog has become. Life hasn’t always been easy for him, but he’s persevered and paved the way for so many people. I couldn’t be more proud.”
Panel guesses: Ludacris, Omarion, Tommy Davidson
Previous songs: “U Can’t Touch This,” by MC Hammer; “In Da Club,” by 50 Cent
Previous panel guesses: Michael Johnson, Carl Lewis, Ray J, Alfonso Ribiero, Kevin Hart, Omarion