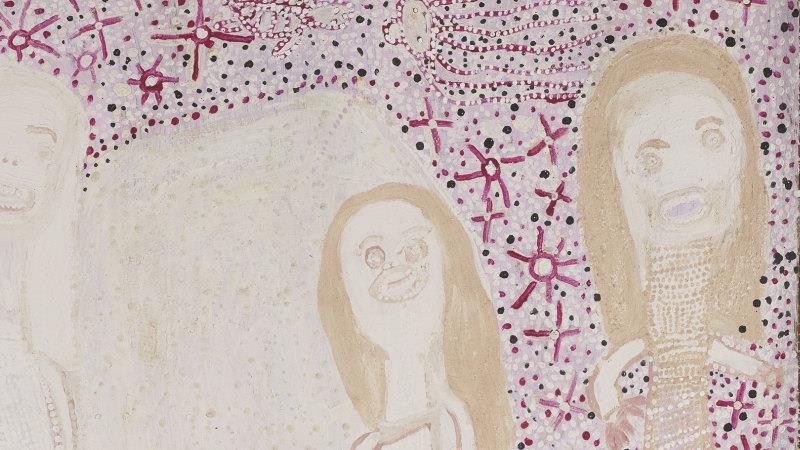 For almost 40 years Telstra has had a dream run with its sponsorship of the National Aboriginal and Torres Strait Islander Art Awards (NATSIAA). Held every August at the Museum and Art Gallery of the Northern Territory (MAGNT), the competition has become the primary focus for Indigenous communities and individual artists from all parts of Australia. At the same time, a wide range of satellite events have flourished as part of an annual Darwin Festival that has done much to bolster the city’s cultural credentials.

Other drawcards include the National Indigenous Fashion Awards, the Darwin Aboriginal Art Fair, and the National Indigenous Music Awards. Two local art dealers, Paul Johnstone and Matt Ward, produce an excellent set of smaller exhibitions under the umbrella title, Salon. Another obligatory stop is Charles Darwin University (CDU) Gallery, which invariably has something worth seeing. 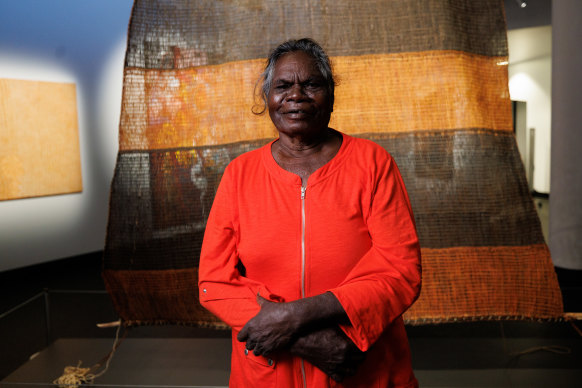 This year, MAGNT welcomed a new director in Adam Worrall, an experienced museum administrator who worked for many years at the National Gallery of Australia. Worrall is full of enthusiasm for the job, and begins at an ideal time, with a sympathetic government committed to building a new gallery in the CBD to display MAGNT’s art holdings, allowing the existing building to be completely occupied by the museum. This is an overdue initiative, as the institution’s split identity has long forced disparate displays to compete for space. The new building, which is being co-authored by Clare Design, the same architects responsible for Brisbane’s highly successful Gallery of Modern Art, is due to open in late 2024.

As for the NATSIAA, for 2022 Telstra has doubled the prize money for the seven separate awards, making it the richest art prize in Australia, with the winner taking home $100,000. This sounds impressive, but it has been a long time coming. Only a couple of weeks ago, Hadley’s Orient Hotel in Hobart sponsored an art competition with the same first prize. If one independently owned hotel can afford it, could such a large company do less? 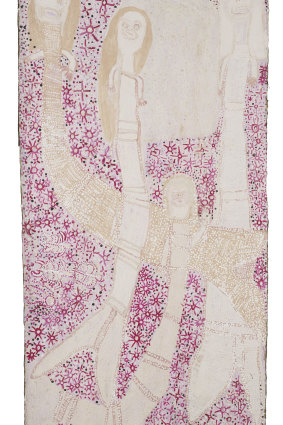 In Australia, one must be thankful for any sponsorship whatsoever of cultural events, but the disparity between the amounts spent on the arts and on sport says a lot about our priorities. It’s no surprise, but still slightly depressing.

It’s not often that a fibre work triumphs in an open competition, but this year the main prize went to Margaret Rarru Garrawurra for Dhomala (pandanus sail), a large grass weaving, banded in black and orange. As the title suggests, it’s not a mat but a sail – an historical reference to the Macassans who traded with the people of Arnhem Land for hundreds of years until banned by the federal government of Australia in the early 1900s. The artist’s grandfather learned how to make sails from the Macassans, and passed the skill on to his son. Many years later, those techniques have reappeared in Garrawurra’s weaving, which has elements of both sail and flag.

Among this year’s entries, it’s impossible to ignore the Bark Painting Award won by Yolngu artist, the late Ms D. Yunupingu, with a characteristic scene of mermaids on a pink, decorative ground. I’m told the artist had the temperament and aura of a saint, and maybe some of that is reflected in the serene, irresistible paintings she created late in life.

Another worthy winner was Jimmy John Thaiday, from Erub in the Torres Strait, whose video Beyond the Lines took out the multimedia prize. The camera completes a series of sweeping pans of the pale blue waters around the island, cutting back to Thaiday’s own rugged presence, emphasising the connections between the artist and his country. It’s a work that makes one’s spirits soar.

The coveted prize for an emerging artist went to Louise Malarvie, from the Kimberley, for Pamarr Yara, a painting that captures the glint of light on the desert, the grainy texture of sand and stones. The artist remains grounded in tradition, but there’s an expressive element in the work that is entirely personal. 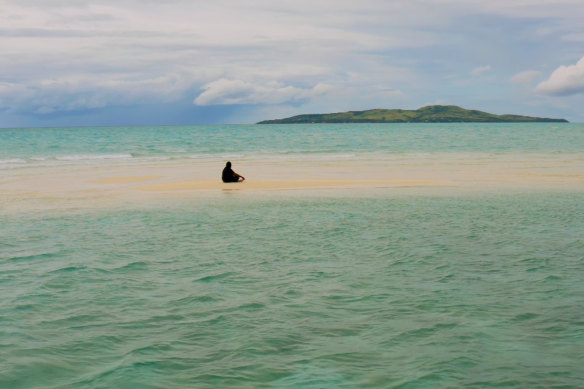 Jimmy John Thaiday’s Beyond the Lines, 2022. Courtesy of the artist and Erub Arts

Of the other prizes, local favourite Gary Lee took out the Works on Paper award for a heartfelt tribute to his grandfather, who was killed in the bombing of Darwin. Bonnie Burangarra and Freda Ali Wayartja received the Wandjuk Marika 3D Award for an elegant fish trap, making it a great year for fibre artists.

Betty Muffler, from Indulkana in Central Australia, won the General Painting Award for Ngangkari Ngura (Healing Country), a strong work in a field in which there was plenty of competition. Tuppy Nginta Goodwin was represented by a very similar work to the one which won the 2022 Hadley’s Art Prize, while Patju Presley must have given the judges pause with a powerful Untitled painting based on his homelands near the Great Victoria Desert.

Of the other exhibitions to be seen in Darwin, the stand-out was Timo Hogan at the Northern Centre for Contemporary Art. The artist has one subject: Lake Baker, a vast salt lake at the edge of the Great Victoria Desert. Completely comfortable with a large scale, Hogan depicts this country on giant-sized canvases, showing the creamy-white surface of the lake enclosed by a field of black. In most of these pictures, a blind water serpent slithers along the lake’s edge, an intermediary between the darkness and the light.

If I had the space, there’s much that could be written in praise of Barayuwa Munungurr at Outstation Gallery, Patsy Mudgedell at the Paul Johnstone Gallery, and Dhambit Wanambi at Tactile Arts, but I’m wary of turning this column into a long list of names.

The surprise this year was the exhibition Shock and Ore held at the CDU Art Gallery and up-and-coming private venue, Coconut Studios. The artists, who go by the name Tennant Creek Brio, are a men’s collective who took up painting as a form of art therapy. If this suggests a group of ageing beardies painting still-lifes, think again. To describe the paintings and assemblages created by the participants in these shows, one turns to words such as “raw” and “wild”. Fire Serpent by Rupert Betheras and Lionel Possum, at the CDU Gallery, is roughly 4×2 metres – a blazing red monster set against a splash of yellow and a chaotic underpainting.

The Brio artists are a mix of Indigenous and non-Indigenous, their expressionist sensibilities formed by an imaginative engagement with many different influences. Some of this is pure fantasy – mermaids, bears, spirit figures – but a large part derives from the nature of Tennant Creek itself.

Once a place of great spiritual value to the Aboriginal people, it has become an industrial wasteland through the depredations of mining. The town is generally viewed as an environmental and social disaster, but the most extreme situations can give rise to vital forms of artistic expression. Brio’s work is incredibly aggressive, but not in a stupid way. The large paintings are full of fantasy, while the use of car bonnets and other discarded metal surfaces reflects the warped ‘spirit of place’ of an industrial town.

Curator Erica Izett calls it “guerilla theatre”, a description that captures both the ‘outsider’ status of these artists and their extravagant sense of spectacle. The explosive nature of these shows also allows us to see how cosmopolitan Darwin has become in its growing cultural maturity. The rest of Australia likes to think of the NT capital as a frontier town but, compared to places such as Tennant Creek, it’s a playground for the middle classes.

John McDonald was a guest of Telstra.

To read more from Spectrum, visit our page here.