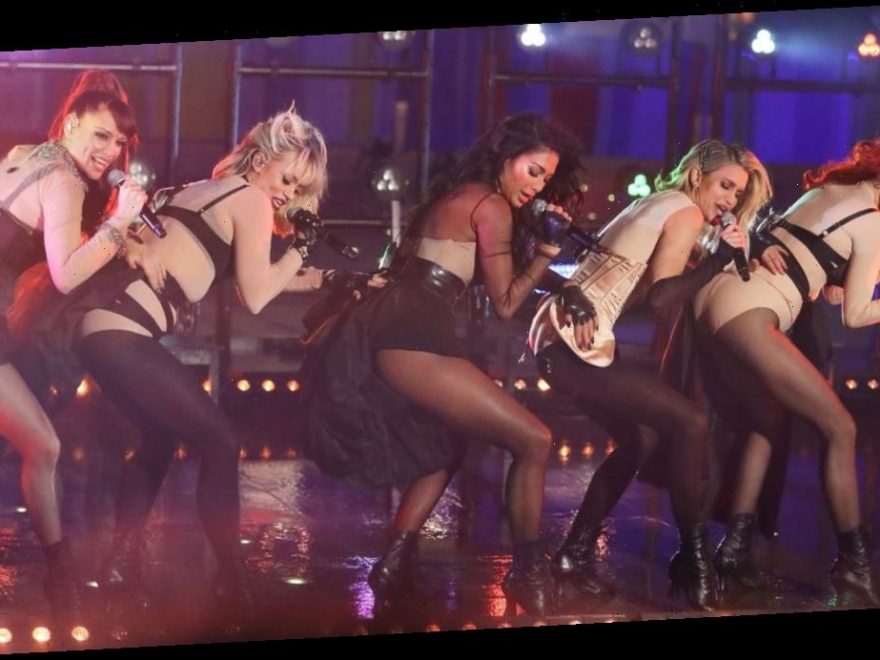 The Pussycat Dolls marked their return to the music industry with their catchy single React, which went down a storm after the quintet debuted it on The X Factor , which Nicole served as a judge on.

However, last night was slightly less successful as the girls appeared on the popular magazine show, BBC's The One Show to perform their comeback single with viewers flocking to Twitter with some claiming that the group were miming and others defending their famous popstars.

The hitmakers failed to realise their backing track, which featured backing vocals for the group had already begun playing, meaning they missed their cues and stood on stage with their backs turned away from the camera and audience who had gathered outside the iconic Broadcasting House studios for the performance. Nicole Scherzinger, Ashley Roberts, Kimberly Wyatt, Jessica Sutta and Carmit Bachar were ready to perform when the show's host, Matt Baker introduced them to the hundreds who had gathered and the millions of viewers at home.

The staggering reaction caused Jessica to look at her bandmates, potentially wondering what had happened.

After several moments, the track cut out with former Blue Peter presenter Matt re-introducing the singers.

However, the music soon came back on and the performance was able to get underway – with Nicole and her bandmates proving that they were not taking any prisoners.

Viewers instantly took to Twitter to share their thoughts on the performance with one saying: "Big fail on the one show with pussycat dolls. Basically they're miming."

A second went on to say: "Pussycat Dolls miming fail on the #oneshow".

Another viewer waded in with: "That was embarrassing the #pussycatdolls miming on the One Show #livetelly".

However, a fourth commented: "Awks Pussycat Dolls on The One Show tonight & their earpieces weren’t working and the hosts had to reintroduce them".

A fifth waded in to defend the Buttons hitmakers, adding: "That was live. She didn’t sound her best but it was live. All that dancing how could she not sound perfect."

The Pussycat Dolls are set to embark on a UK tour later this year and announced it towards the end of 2019.

Following their performance, Nicole looked less than impressed as she was seen getting into a car with rugby ace boyfriend Thom Evans.

Daily Star Online has contacted a representative for The Pussycat Dolls for comment.