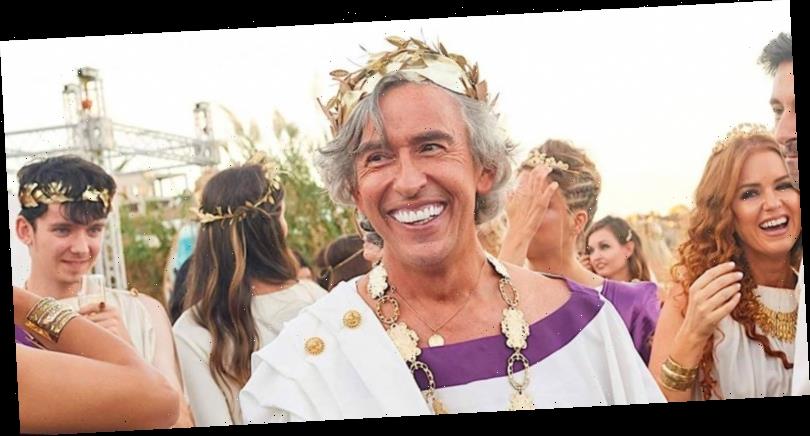 If you’re familiar with the name Sir Philip Green, there’s a good chance you’re a) from England or b) have glimpsed inside a tabloid at some point over the last few years. The owner of Arcadia, the retail group behind Topman and Topshop, Green was long a merchant man-about-town, whose name was frequently at the top of the Sunday Times‘ Rich List. Now, he’s better known by names like “Sir Spankalot.”

Take it from Paris Hilton, who’s known the Green family practically her entire life: “Philip knows how to throw a party,” she told W at a Topshop event in 2014. With performances by Lionel Richie, Jessie J, and Nick Jonas, and guests like Naomi Campbell and Beyoncé, it was just another night for Green—at least, until recently. Just two years later, the House of Commons would endorse the move to cancel Green’s knighthood, a previously unprecedented move for the MPs.

The details are myriad, not to mention grisly. But thanks to the director Michael Winterbottom, there’s now a slightly easier way to study up. His new film, Greed, is a satire about Green—sort of. “It’s fiction,” Winterbottom said at a screening of the film in New York on Monday night. “The starting point is obviously Philip Green, but it’s not about any individual. It’s a satire on the way the world works, really.” In other words, it’s about inequality—particularly when it comes to the “grossly huge” offenses of the retail fashion industry.

Still, there’s no denying the similarities between Green and the film’s protagonist. Steve Coogan stars as Sir Richard McCreadie, a fashion tycoon with alarming dentures who’s known as “McGreedy.” The film wastes no time in explaining why. Whereas his ex-wife and business partner, played by Isla Fisher, is (at the very least) painfully out of touch, McCreadie is objectively a Bad Man. Some of his behavior—like systematically bullying foreign factories into accepting criminally low wages—could perhaps be blamed on business. But most of it definitely couldn’t—like the way that he bullies his son, played by Sex Education’s Asa Butterfield. Or the way that he evicts a group of Syrian refugees from their makeshift home on a public beach in Mykonos, and then deceives them into working his birthday party for free.

Aside from flashbacks to McCreadie’s parliamentary hearing and visits to factories, the film unfolds over the days leading up to McCreadie’s 60th birthday party. Green’s 60th—which, in an interview with W, he once made reference to as simply “PG60”—took place at a nightclub in Mexico built explicitly to host his guest and performers, who included Leonardo DiCaprio and Stevie Wonder. But Green’s 50th was almost exactly what McCreadie’s is in the film—except even more over-the-top. And that’s saying something. With McCreadie acting as Emperor Nero, the scene comes complete with a performance by Rod Stewart, a specially built gladiator arena, and a togas-only dress code.

The film doesn’t delve into the allegations of Green’s sexual harassment and racist treatment of his staff, nor the four misdeameanor assaults he was charged with last year. Instead, it ends abruptly, in a manner that couldn’t be more fitting. (Hint: The lion who’s been cooped up for guests’ entertainment figures prominently.) And then, even more abruptly, the film flashes through a series of real-life, more general statistics about the retail fashion industry and inequality.

That ending, Winterbottom stressed, was not his, but Sony’s. Originally, he’d cited specific high street retailers, contrasting their owner’s salaries with their workers’ daily wages. (The owner of Zara, for example, is worth $67 billion, while per diem rates at factories that supply high street brands in Myanmar and Bangladesh cap at $3.60.) “It’s not about an individual being bad. It’s about a system,” Winterbottom said of why he wanted to provide real-life examples, which the head of Sony ultimately decided were too risky.

Still, Winterbottom has managed to spread the word. “Given that I couldn’t do it in the film exactly, it felt like one way of doing that would be talking about it in the press instead.” In other words: If you want details on the extent of billionaires’ excess, you’re better off reading up on the real Green instead.