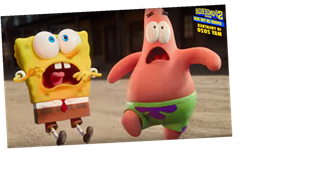 With the Super Bowl just around the corner, viewers are getting ready to tune into the big game and all the primetime entertainment that will go along with it. One of the best parts about watching the game is all the new commercials that are sprinkled throughout, and the SpongeBob SquarePants: Sponge On The Run Super Bowl trailer is definitely one to look forward to. While the CGI movie won’t be heading to theaters until May 22, this teaser will have you so pumped for its release with cameos from Keanu Reeves, Snoop Dogg, and, of course, all your fave Bikini Bottom residents.

On Jan. 29, Paramount Pictures gave viewers a sneak peek at what they can expect when SpongeBob SquarePants and the rest of the gang from Bikini Bottom head back to the big screen. The newest trailer shows that Patrick Star, Squidward Tentacles, Mr. Krabs, Sandy Cheeks, and more will be joining the yellow sponge as he attempts to find Gary, who’s apparently been "snail-napped."

In the teaser, a number of hijinks ensue as SpongeBob SquarePants and Patrick Star head to The Lost City of Atlantic City, including numerous car chases, churros, robots, and cameos from Snoop Dogg and the internet’s boyfriend, Keanu Reeves. The latter two actors are the only characters that aren’t in CGI form, although Reeves’ face is hilariously affixed to a "wise sage." From the trailer, it looks like Snoop Dogg (who’s wearing a bright purple silk suit) will be rapping at some point during the movie, but it’s hard to tell for sure.

The latest sneak preview comes months after Paramount Pictures first dropped its official trailer for the franchise’s first CGI movie back on Nov. 14. At the time, viewers learned that the premise behind the film would revolve around SpongeBob SquarePants’ pet snail Gary being kidnapped and how the crew from Bikini Bottom would band together to find him and prove that there’s "nothing stronger than the power of friendship."

The latest trailer gives fans a glimpse at some of the major star power that will be a part of the project with the Snoop Dogg and Reeves appearances, but Scarlett Johansson, Alec Baldwin, David Hasselhoff, Antonio Banderas, Reggie Watts, and Awkwafina are also slated to voice characters in the movie.

Unfortunately, fans will have to wait for a few months to return to Bikini Bottom, but in the meantime, I’d recommend checking out this 30-second trailer during the Super Bowl and starting the countdown to May 22.