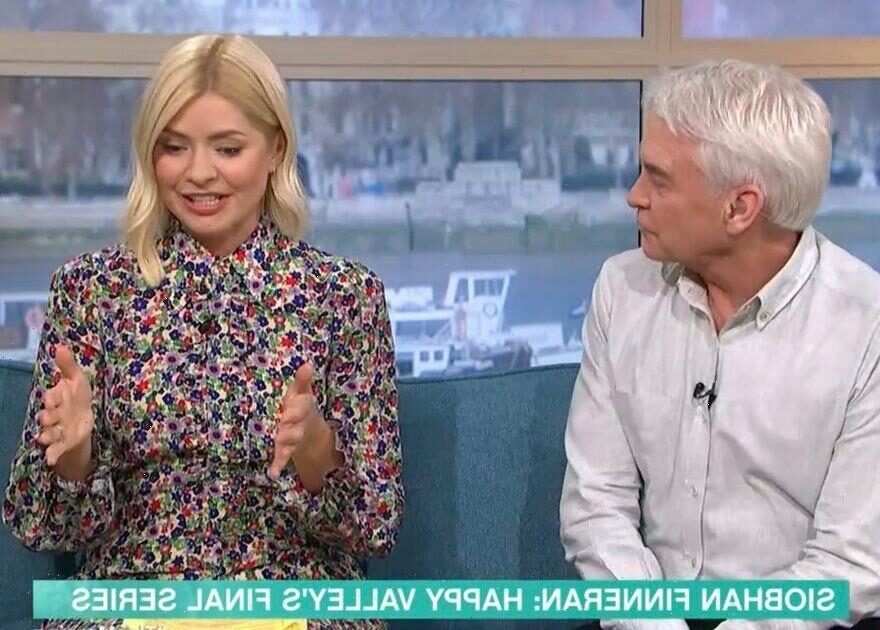 Holly Willoughby and Phillip Schofield were joined by actress Siobhan Finneran to talk about the new series of Happy Valley on This Morning today.

But as the hosts were about to question Siobhan, 56, on the new episodes, Phillip, 60, mentioned that Holly, 41, was unsure whether she had actually seen the latest episodes of the hit British drama series.

Phillip started by saying: "Siobhan, who plays Catherine, joins us," before directing his words at Holly: "We're having to come clean, well you are.

"Because Holly has caused chaos this morning because she said, 'I watched episode three,' and our team said only two episodes have gone out, and she said, 'Yeah, I've seen all of that.' And now she's not sure she has watched it."

Holly squirmed on the sofa next to Phillip, as she added: "No! I definitely have watched it."

Phillip continued to joke: "When we showed you over there a moment ago, our director said, 'Is that woman in the show that you've been watching? So, you know…

Siobhan then said: "And she's still not sure? But I am in it."

Holly went on to joke: "To talk about your cookbook, right?" before correcting herself: "No, I watched two episodes yesterday afternoon.

"But I definitely watched the first episode and then I must have watched a rogue one from series two, but somehow, it still made sense! It was Sunday afternoon, I had a big Sunday lunch."

Siobhan added: "You probably saw me drinking a cup of tea at the table because that's on every episode."

Many viewers took to Twitter as they watched the segment, with one writing: "Holly clearly hasn't watched it, doesn’t even know which episodes have come out and which haven’t #thismorning."

"OMG cringe! I can't watch this #thismorning," a social media user wrote, while another shared: "Ah! Holly! This is cringe."

"What is Holly on about, episode 3 and 4 not even out yet #ThisMorning," another said, while a third added: "You can tell Holly hasn’t watched it. #ThisMorning."

Phillip and Holly returned to their hosting roles on Monday 9 January after some time off during the Christmas break.

And at the beginning of the episode, Phil even admitted he was "nervous" in case he had forgotten how to present.

"It's the end of summer and the end of Christmas, when you have completely relaxed, your mind is away from everything and you think: 'I hope I can remember how to do this!'" he laughed.

Holly then advised Phil: "That's the thing about being consistently a little bit rubbish, when you get to these points, it's not such a shock for anyone! That's the way to do it, Phil, I learnt that a long time ago."