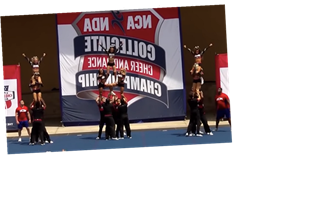 Cheer fans, I have some big news for you: The full video of Navarro’s 2019 NCA Championship performance was *finally* posted to YouTube on Jan. 28. I repeat, you can now watch the routine that earned Lexi, Gabi, Jerry, and the rest of the Cheer team the coveted first prize. Cheer only gave peeks of the full-out routine throughout the season, and since the docuseries premiered, a full video of Navarro’s 2019 NCA Finals routine has been particularly hard to come by. But now all that has changed.

Varsity Spirit, the company that was introduced to Netflix viewers in Cheer as the leading authority (and basically monopoly-owner) of the cheerleading world, apparently denied Netflix producers rights to film the competition on their own cameras. Instead, Cheer producers relied on iPhones of "attendees" (who were likely the filming crew themselves) and other cheerleaders to capture the routine and off-mat moments during the competition. Reportedly, Varsity Sprit offered Netflix footage from the company itself, but Netflix producers passed for unknown reasons.

But now, 20 days after Cheer dropped on Netflix, Varsity Spirit has released the full video of the Navarro College 2019 NCA Championship performance on its YouTube channel. Enjoy the full performance for yourself below:

Since the series premiered, fans have been eager to watch Navarro’s full routines, but a recording from the final 2019 Daytona performance was suspiciously difficult to come by. While championship routines from other colleges like Texas Tech or NMSU were available, a video of Navarro’s final performance was nearly impossible to locate online. Ironically, Navarro’s routine is now the only full routine from the 2019 Championships that is available on Varsity’s YouTube channel, suggesting the company is either taking advantage of the excitement surrounding the show.

TMZ has reported Varsity is in talks with Netflix to work together again, which is a good sign for a potential Season 2 of Cheer. But fans of Navarro shouldn’t get too excited, yet. Even if the show does return for a second season, it might not necessarily follow the same team. A Central Texas news station recently reported the team might be forced to make a decision between continuing with Netflix or competing in the NCA Championships in Daytona, per an exclusivity policy stated in the competition’s rule book. The rule states:

The rule goes on to state any media license would prohibit including certain subjects in programming. However, since this rule has been in place since 2017, as long as Netflix sticks within the written guidelines, there’s reason to believe a Season 2 could still happen with Navarro.

Cheer Season 1 is available on Netflix now, and until official news about a second season is released, you can watch the Daytona performance on repeat to get your fill of Navarro-related content.