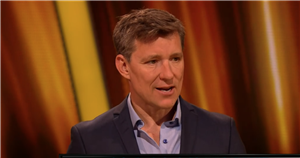 Fans of Tipping Point were left far from impressed after a contestant appeared to do quite a lot of chatting during Tuesday afternoon's show (January 24).

Confident and charismatic Ann appeared on the show with bags of energy and a very distinctive laugh.

But viewers at home were clearly underwhelmed when Ann continued to add her two pence and giggle as presenter Ben Shephard hosted the popular ITV gameshow.

One social media user wrote: "There's nothing worse than someone giving a running commentary on another players go ….. sakes Ann, pipe it down lol."

Another said: "Ann talking over Ben the host of the show."

A third added: "Contestant cackling in the background klaxon."

Meanwhile a fourth fumed: "Wish Ann would stop interfering when the others play!!"

But despite the fury, others appeared to support the lively player, with one person writing: "She may have an annoying voice and laugh but at least she has a personality."

Ann competed against players Aman and JP to reach the final.

And after receiving a lucky drop- gaining a huge amount of counters from the machine, Ann quickly became the contestant to beat.

Following JP's elimination, Aman and Ann was left to battle it out in the penultimate round.

Although Aman answered a few number of questions correctly, the amount of counters she received from the machine wasn't enough to sail through to the final round.

Despite many viewers at home thinking Aman did a better job, Ann did showcase her impeccable quizzing knowledge and answered a number of questions correctly, which allowed her gain advantage over the machine.

When asked by presenter Ben what she would do with her winnings if she was to win big, Ann explained that the money would go on extravagant family holiday.

But after trying to win the jackpot counter from the machine, it was clear that Ann had to stick with her earnings.

At the end of the show, Ann walked away with impressive £3,250 which she was evidently pleased with.