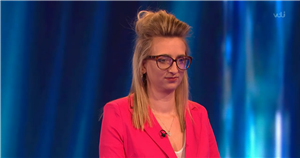 Tipping Point fans have been left outraged at the "s**t" mystery prize that player Ellie won on Friday's (14 October) episode of the show.

Three hopefuls took to their buzzers to try and win the jackpot prize.

After lucky contestant Leo had a lucky fall earning him over £2,000, Ellie knew she didn't have much chance of staying in the show so set her sights on the mystery prize.

Luckily she won it but fans have been left disappointed with the prize.

While another wrote: "An inflatable hot tub. Great prize(!)#TippingPoint" alongside a sarcastic face

Despite a battle with player Maureen, Leo made his way to the final and got a chance to play for the ten thousand pounds mystery counter.

After a tense final round Leo managed to get the jackpot counter with his final question.

One person wrote: "What a lucky s*d!"

And a fifth commented: "Nice guy Leo! Wish he’d have got the double #TippingPoint"

Recently on Tipping Point fans were sent into a frenzy after they were distracted by a "hot" player.

Player Hannah was one of the contestants on Tuesday's (11 October) show along side Sat Nam and Alison who were all looking to bag the 10 thousand pound jackpot.

Hannah had to leave after round two but players were distracted from the game as she was "very pretty."

One person said: "Hannah for the win then."

While another penned: "Damn I wanted Hannah to go through."

And a third wrote: "Hannah is actually so pretty though."