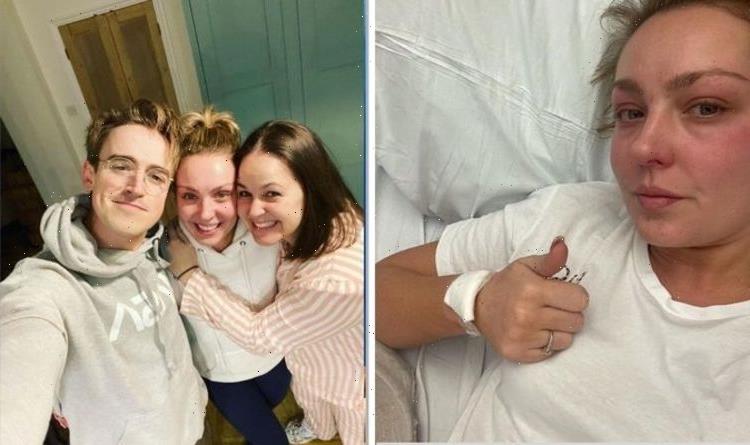 Strictly: Tom Fletcher is eliminated from the competition

Tom Fletcher, 36, has taken to Instagram to express his sympathies for Amy Dowden. The Strictly star has been in hospital due to Crohn’s disease.

Tom Fletcher sent out the post in view of his two million followers.

He spoke about how Amy was one of the strongest people he’s met, and that he had a glimpse of how difficult her life was after watching her Crohn’s documentary.

He said: “Having watched her documentary about living with Crohn’s before we were partnered together, I had an insight into what she has to live with.

“But, without going into detail, being with her during a Crohn’s flare up this weekend was a pretty scary experience to say the least!”

He added that himself and Sara Davies had to look after Amy until the ambulance arrived and that it was a “scary” experience.

But the singer reassured followers that his dance partner was now back to normal and on the road to recovery.

He said: “So glad @saradaviescc and I were with her to do what we could until the ambulance arrived (although Amy doesn’t even remember Sara donating her extra pair of trousers or me heroically carrying her into the ambulance in my crocs).

“She’s home with us now and back to chatting non-stop and drinking her way through our supply of teabags, so I think she’s on the mend.

Fans were quick to offer their support and encouraging words for the professional dancer.

Misshayleyd13 said: “What a trooper. Sending all the love to @amy_dowden and well done to you @tomfletcher & @saradaviescc for being absolute hero’s.” (sic)

Lauramorris1983 wrote: “You guys are good to her aren’t you. Take care @amy_dowden.”

Amy Dowden also released an Instagram post to her 303,000 followers thanking her friends for the support during her hard time.

She thanked her fans for the messages but also thanked the Fletchers and Sara Davies for their on-hand support.

She said: “Thanks for all the messages over the weekend.

“Unfortunately, I was missing from the show as I had an unexpected Crohn’s flare up and hospital admission in which I received unbelievable care.

“Big thanks to lovely @saradaviescc and @tomfletcher for taking care of me (of all the days to be poorly, Ben was in Blackpool with the dance school).

“To the Fletchers who made sure I had everything and more at the hospital.”

She said: “They’ve gone back over all their dances, they’ve been learning the Quickstep they would have done last night.”

Tom and Amy’s last dance was a Couples’ Choice to On My Own from Les Miserables.

They were disappointed with their score which was 31, tying as the lowest with Dan Walker and Nadiya Bychkova’s Charleston.

After a dance-off with Rhys Stephenson and Nancy Xu they were sent back home, despite judge Shirley Ballas saying she would have voted for them to stay on.