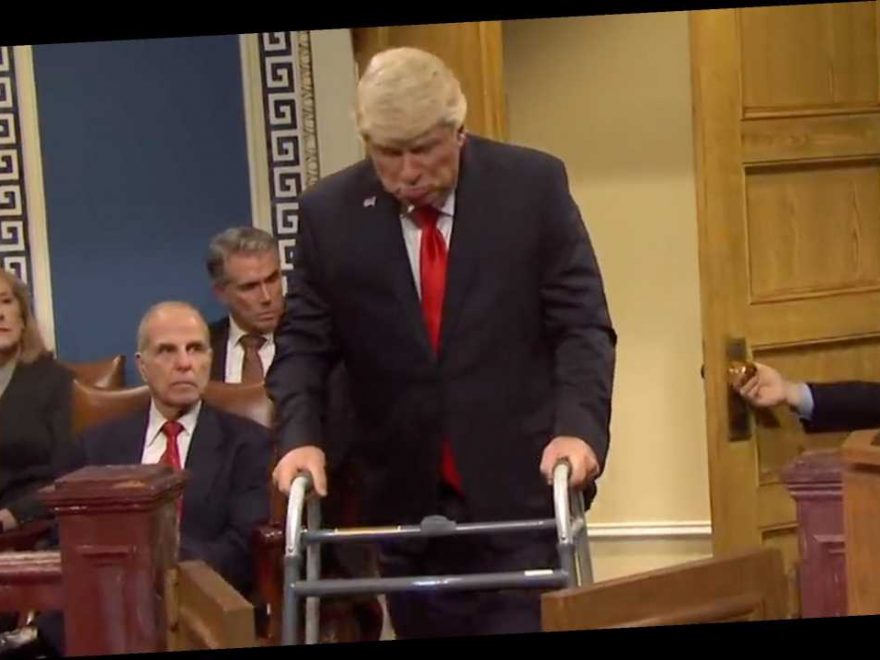 Alec Baldwin played President Trump hobbling into court with a Harvey Weinstein-style walker as Saturday Night Live dreamed up the impeachment trial “you wished had happened.”

Noting the lack of witnesses and new evidence, the famed comedy show instead created a courtroom drama with testimony from a dream cast including John Bolton, a vaping, hoverboarding Hunter Biden and ultimately the president himself.

Trump appeared eager to take a page out of celebrity trials, using a walker like Weinstein has used to arrive for his rape trial, and even putting on a Phil Spector-style wig to look like the convicted killer.

“In which sense, because Harvey and I overlap in a few areas?” Baldwin’s Trump asked, referring to #MeToo claims also made against the president.

The fake president told the hearing that he was a “very sick old man” who couldn’t withhold anything from Ukraine because he can “barely get around the house.”

But he then confessed in the “dream” trial, “My defense is very simple your honor — I’m guilty, but it ain’t no thang!”

“What I’ve learned from this trial is that clearly nothing I do or say has any consequence, so I’d like to come clean about everything,” Baldwin’s Trump told the fake hearing.

“The call with Ukraine wasn’t perfect, it was illegal and frankly it was a butt dial,” he said, before claiming that he watches “CNN all the time” despite making the network the main target of his fake-news attacks.

“I cheat all the time: at golf, taxes, wives, elections, in bathroom scales. I’m not 239 pounds; I’m 475 pounds. And I don’t really need this walker either, although it does help me be lazier, which I like,” he said in the skit.

Baldwin’s Trump then claimed to have cut the funding to fight the coronavirus, calling it “this Wang Chung virus.”

Judge Mathis ultimately found Trump guilty, fining him $10,000 — and forcing him to say something nice about House Speaker Nancy Pelosi.

“Fine. Her body is an eight,” Baldwin’s Trump said.