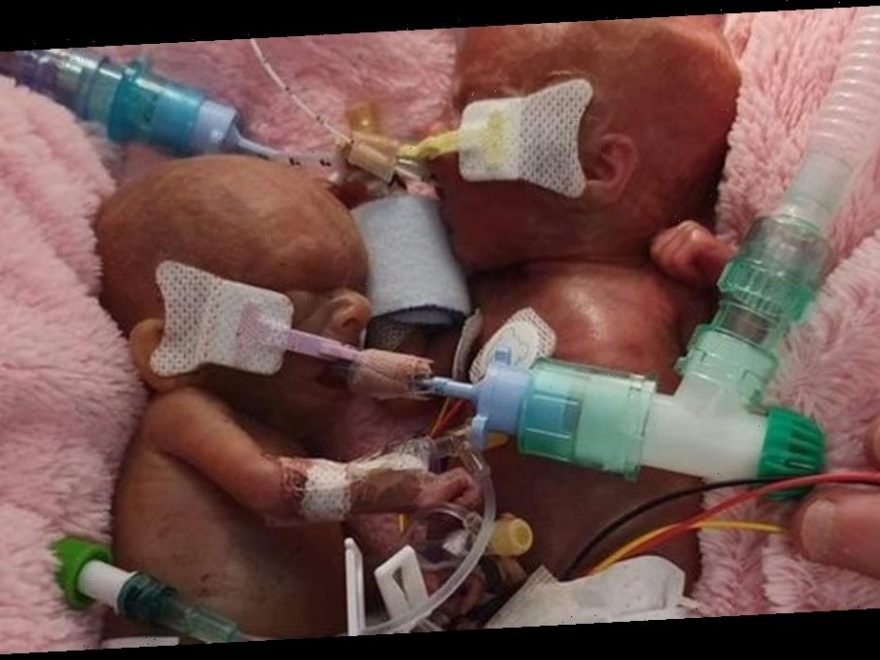 Twin baby girls passed away within months of each other either side of Christmas leaving their young mum utterly heartbroken.

Zoe Marsh said "at 23 you don't expect to be burying your daughters" after first Arya and then her sister Ayva died after short lives filled with pain.

Ayva lasted just three days from her birth on September 3, while Arya managed to enjoy a little life – swimming and meeting the family dog before eventually succumbing on January 20 to the devastating health problems which had begun in the womb she shared with her twin.

Zoe said Ayva showed she was "stunning and feisty" during her three days of life spent in Singleton Hospital in Swansea.

"She was stunning and really feisty. She would have one eye open and always peek at you.

"We spent as much time with her as we could and did footprints with her and read to her.

"She kept getting more and more ill and she was swelling up because she was not getting rid of any fluid."

Zoe began experiencing back pain during her pregnancy and quickly realised "something wasn't right".

The 23-year-old discovered she was suffering with twin-to-twin syndrome, a rare condition where twins share a placenta.

Shortly after her 18-week scan, Zoe Marsh underwent laser surgery in Birmingham in an attempt to separate her placenta, allowing each twin to develop independently.

At her 18 week scan they saw that Arya had more fluid around her than Ayva so on July 11, Zoe went to Birmingham for surgery.

Zoe was devastated to be told she had a monochorionic pregnancy, a multiple pregnancy – most commonly a twin pregnancy – where babies are dependent on a single, shared placenta.

Surgeons attempted to use lasers to split the placenta into two but the expectant mum's waters broke the next day. From 19 weeks to 26 weeks she was leaking amniotic fluid.

She went into labour at just 26 weeks and the twins were born on September 3.

But after Ayva's death, the couple were dealt more devastating news.

Arya, who was one week old, had to be transferred to the University Hospital of Wales, in Cardiff, as she was born with a hole in her bowel.

"It was really, really hard to concentrate on Arya after losing Ayva," Zoe said.

"We felt like we were forgetting about Ayva and we could only have her funeral seven weeks later because we were back and forth from hospitals with Arya."

Poor Arya was found to have suffered a spontaneous perforation of the bowel, and the tiny tot had to undergo surgery. This went well and she had a stoma put in before the family returned to Swansea.

Zoe said Arya was "was fine for a month and was on my milk and formula" before even more bad news crushed all hope.

Doctors told Zoe and David that Arya also had necrotising enterocolitis, where tissues in the intestine become inflamed and start to die. She was rushed back up to  Cardiff for another two surgeries.

"She swelled up within half an hour," said Zoe.

The first procedure that Arya underwent involved her stomach being cut open to "release the pressure and gases" that had built up inside her.

The second procedure, to remove the dead tissue, left her with just an eight centimetre bowel.

Her mum added: "After the first surgery they didn't close her back up in order to give her bowel a chance to rebuild itself.

"But in less than 24 hours they saw that was not happening so they operated again to remove the dead bowel.

"We found out that she had an eight centimetre bowel and it was supposed to be 200 centimetres.

"She couldn't live off that."

Following the two procedures, Arya's wound became infected and she also suffered an infection in her longline used to feed babies. This became septic and left medical staff unable to give her morphine or medication.

Just days after Christmas her parents had to make the difficult decision to move her to the Ty Hafan children's hospice in Penarth.

On their journey to Ty Hafan at the beginning of January, staff arranged a pit-stop so the family could take their daughter to the beach for the first and last time.

While in the hospice, Arya got to go swimming, out for a walk in the pram and even got to meet the family dog.

Zoe said: "When we got to Ty Hafan my dog was there with my mum so she got to meet Arya.

"She was a big, big character and she was definitely cheeky. They both had so much strength for tiny humans.

"I bought Disney princess outfits for her from Build a Bear because she was so small. She made it to four and a half pounds.

"Since she had her infection she was nil by mouth so she was having midazolam for her hunger pain.

"I was watching my daughter losing weight. It was like a waiting game and I would always pray for one more day but then on that one more day she would be in more pain.

"Arya lasted two and a half weeks without oxygen before passing away on January 20.

"The stuff I've left there with is amazing; moulds of her hands and I had loads of professional photos taken of her."

Zoe said that, while Arya was fighting for her life in hospital, the place in which they lived "never felt like home".

"It is difficult to have that love and then going home and not being with them," she said.

"Since coming home I have turned my house upside down because I don't want to be here.

"It never felt like home when she was in hospital.

"The first time I slept in my bed after going into labour was five weeks later because we had been travelling to Bristol and Birmingham for consultants and specialists.

Now the family are fundraising to give back to the neonatal intensive care unit (NICU) at the University Hospital of Wales, while some of the money raised will also be going towards Arya's funeral.

Zoe is hoping to raise £1,000 to be able to provide hampers for parents with children on the ward and new bedding.

She said: "It made a difference for me having nice bedding for her and it made it more personal.

"A lot of the money is going to NICU but we are fundraising for the funeral too.

"At 23 you don't think you're going to be burying your daughters.

"The support has been amazing. I would call some of the nurses my family because they made the experience a lot better."