Singer Mama Alto is a trans woman of colour. “I’m definitely on that feminine side of the spectrum that is gender,” she says, pinning flowers to her hair when on stage. She describes herself as “jazz singer, cabaret artiste and gender-transcendent diva”, partly because her philosophy is that, whatever gender each of us feels or knows we are, “we’re all unique in the way we experience and live our genders, and that’s a beautiful thing”.

This year, the Sydney Mardi Gras has a strong emphasis on transgender rights, and many trans and gender-diverse people will be telling stories of their rites of passage and liberated lives to promote understanding, achieve law reform and equity with other people, improve health and save lives. Mama Alto is co-creator with Maude Davey of the all-star cabaret Gender Euphoria, featuring a rainbow of performers whose gender identities range the spectrum.

“Australian culture hates when people play the victim, and try to be the most oppressed of anyone,” Alto says. “That’s what we’re often told whenever we stand up to injustice. That fuelled part of our idea to make a show that was entirely joyous, euphoric and enlightening. We thought, ‘OK, if you don’t want us to play the victim, we’re going to show you how fabulous we are, and maybe you can get on board with that’.” 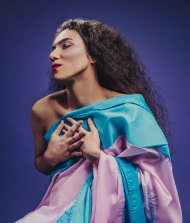 Mama Alto got her name by merging two nicknames while growing up in Melbourne. First came “Alto” because she was placed in the alto section, the lowest female part, in school and extracurricular choirs. Then came “Mama”: first because she was bossy and clucky like a mother hen, and second because she sang in an old-fashioned jazz or red-hot mama style like Billie Holiday, Ella Fitzgerald, Marilyn Monroe or Marlene Dietrich.

“My voice never broke, which was a blessing when I came to realise my trans identity, that I identified as feminine, and very conveniently I had this very high singing voice, which is actually a mezzo-soprano voice,” she says. “But I was put in the alto section because people thought it was less odd to see someone [there] who they thought was a boy, who should have had a broken voice by then … it was less unseemly if I was in that lower female voice section.”

If you don’t want us to play the victim, we’re going to show you how fabulous we are, and maybe you can get on board with that.

Lots of people today know her as Mama Alto on and off stage; even her mother calls her Mama a lot of the time. But when she was a child, her Javanese father would sometimes mix up her pronouns in English, sometimes calling her “he” and other times “she” when introducing her to people. “I was always terrified when my father would use the ‘she’ pronoun; that I would get in trouble or that they would find out my secret,” Alto recalls. 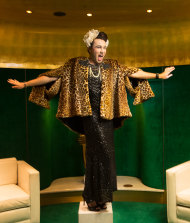 In recent times, Alto has been looking into officially changing her name on her passport and other identity cards because she no longer uses the male name given at birth. “A lot of trans people won’t discuss what they call their ‘dead’ names because it can be very traumatic,” she explains.

“Mine doesn’t have a traumatic memory [but] a lot of people can identify with being a child and having a piece of clothing they were made to wear because it was for a special occasion but was incredibly uncomfortable and left them with chafing when they took it off. That’s how I feel about the name I was born with.”

I’m not a woman, and I never want to be a man, and yet I have this colossal need to be both.

Alto says identity documents presented at airports, in medical contexts or elsewhere “can get dangerous because people don’t like to be confronted with confusion” when the ID “doesn’t match what they think they’re seeing … having your name, your gender marker, your pronouns matching who you are makes existing functionally in the world possible”.

Campaigners have set their sights on NSW and other states and territories for law reform after Victoria passed a law last August to allow trans and gender diverse people to change their birth certificate without “sex affirmation” surgery. The same-sex marriage campaign was important, Alto says, but now “people who showed up for that need to show up for other marginalised people”.

She says “hateful” political and media rhetoric has arisen in the wake of the marriage equality and Safe Schools campaigns, and “people on the extreme right want to kill us”.

“Attacks on anyone seen as different are partly a way that somebody can make sure they themselves are ‘normal’,” she says. “We see it with misogyny, xenophobia, racism, homophobia and transphobia. You make yourself the ‘normal’ by outcasting others. Maybe in the Neolithic age that was a useful survival skill. Nowadays, that ‘us’ and ‘them’ mentality is used and abused in politics to divide and conquer.”

Teddy Cook, who is ACON’s manager for trans and gender diverse health equity, says trans people “have existed across every population since the beginning of time”. Cook will tell his story at My Trans Story for Mardi Gras, which he sees as an important opportunity to present a trans profile to the broader population, because “there are so many myths about what it means to be trans”, and broader understanding through storytelling will lead to equitable rights.

That ‘us’ and ‘them’ mentality is used and abused in politics to divide and conquer.

“Most trans people live incredible, happy, healthy, fulfilling lives, although many of us are shouldering heavy burdens of poor mental health and other experiences related to how we are treated,” he says, “but this is an opportunity to celebrate and honour and cherish diverse stories.”

Cook and his twin, Kate Jones, grew up in Penrith and Baulkham Hills in western Sydney. He was a fan of Ugly Kid Joe, Faith No More and Guns'n’Roses. “We were pretty tough; we needed to be,” he recalls. “I always knew that I wasn’t like my sister. We were identical twins, it’s just that she was a girl, and I was a boy.” 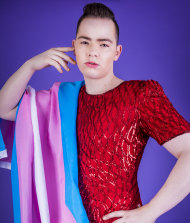 Growing up, he “didn’t even know trans was a thing, and I didn’t know that I could be the boy or the man that I knew that I was”. His parents lacked the resources to affirm his male identity when he told them he was a boy; they didn’t know how to react. He felt isolated, so his health suffered. Today, he wants to ensure that no young trans or gender-diverse person has to go through similar pain.

Another My Trans Story participant, Holly Conroy, says that had she heard trans stories as a teenager, she might not have waited until 37 to transition. “It’s important for young people to let them know there’s a place for them in this world,” she says. Conroy is remarkable both as a trans woman who drives trucks and as an organiser of the first-ever Pride parade in Wagga Wagga, held last March, to be repeated this year.

The event was “absolutely amazing”, despite the conservative region’s strong adherence to religious faith. “Country people have been misjudged over the last few years,” she says.

On the question of pronouns, Conroy says it’s good manners to ask which pronouns someone uses if you are unsure, but don’t worry if you happen to use the wrong form: “Just say ‘sorry’, and move on.”

London-based comedian Krishna Istha, who will appear at the F— Fabulous cabaret, was born in Kerala, India and at birth was pronounced a girl but bestowed a gender-neutral god’s name with masculine attributes. “I’ve always shunned gender roles,” says Istha, who went to an all-girls school. “I’m not a woman, and I never want to be a man, and yet I have this colossal need to be both.”

In a family full of women, there was no expectation to behave in a certain gendered way, which Istha says meant a lack of inner-turmoil: “I was just me from the start.” Being non-binary, there was a time Istha preferred the gender-neutral pronouns they and them, but now “I don’t mind what’s used for me”.

Since starting hormones, however, Istha has noticed female strangers move away on the night bus, because Isthna is increasingly seen as masculine, read by some as a brown male: “My experience is quite different from my white trans counterparts,” Istha says. “I get searched a lot more when I go into stores. I definitely get stopped by cops more than before.”

Any advice for parents of gender non-conforming children? “Some of the happiest adults I know were allowed to just ‘be’ as kids. If you support them, they will just grow up to be stable, self-sufficient and happy.”