The United States plans to deploy six nuclear-capable B-52 bombers near Darwin as part of what experts say is a strategy to dissuade China from invading Taiwan by creating a “unified front” against Chinese aggression.

While the aircraft have been used in training exercises in Australia for decades, the ABC’s Four Corners reported the US is planning to build dedicated facilities for up to six B-52 bombers at the Tindal air base, south of Darwin, for use during the Northern Territory dry season. 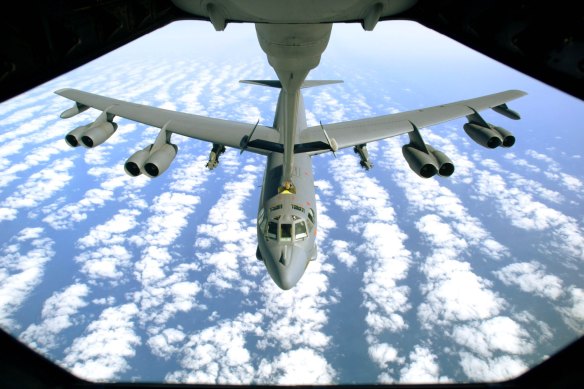 US B-52 bombers have flown over Australia for decades.Credit:AP

The planned “squadron operations facility” is expected to cost around US$100 million.

The US Air Force told the program: “The ability to deploy US Air Force bombers to Australia sends a strong message to adversaries about our ability to project lethal air power … the RAAF’s ability to host USAF bombers, as well as train alongside them, demonstrates how integrated our two air forces are.”

The move would represent an important deepening of US-Australia military ties according to Malcolm Davis, a senior analyst at the Australian Strategic Policy Institute, and also increase the likelihood of Australia being drawn into a conflict over Taiwan.

“It’s a very sensible move on Australia’s part to strengthen integrated deterrence as a way to dissuade China from making a move on Taiwan,” he said.

“If you want to avoid a war you have to present a united front against China rather than suggest Australia would stay out of the war.”

Davis said the US military bases on Guam and the Japanese island of Okinawa would be extremely vulnerable to Chinese attacks if a war broke out over Taiwan.

It would be far more difficult for Beijing to launch attacks on US aircraft based in Darwin, he said.

“As allies, it is important for us to step up and burden share,” he said.

“I don’t see this as provocative.”

“It makes Australia an even bigger part of the global nuclear weapons threat to humanity’s very existence – and by rising military tensions it further destabilises our region,” he said.

Neil James, executive director of the Australian Defence Association, stressed that B-52 bombers have been exercising over the Northern Territory since the 1980s.

The aircraft are not allowed to carry nuclear weapons while in Australia, he said.

James said it was a “logical” step to create dedicated facilities for the aircraft in Australia as a response to Beijing’s expansionism, including the construction of military bases in the South China Sea.

US military officials have said they expect China to try to invade Taiwan by around 2027.

Chinese President Xi Jinping said earlier this month: “The historical task of the complete reunification of the motherland must be fulfilled, and will definitely be fulfilled.”

Then defence minister Peter Dutton flagged an expansion of the US military presence in Australia at last year’s annual Australia–US Ministerial meetings in Washington.

“The air capability will be enhanced, our maritime capability enhanced and certainly the force posture enhanced,” he said.

“If that includes basing and the storage of different ordnances [military supplies], I think that is in Australia’s best interests and in our national interests.”

Specifically, Dutton said there would be “greater air co-operation” with the US, including through “rotation deployments of all types of military aircraft to Australia”.

US Defence Secretary Lloyd Austin said he was excited by the opportunity to “expand our access and presence in Australia”.