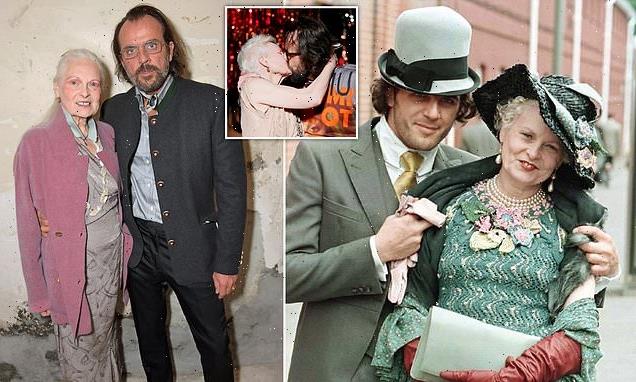 Vivienne Westwood’s unconventional marriage: Late designer, 81, met her bisexual husband, 56, when he was 23 and she was his professor – and said giving him ‘total freedom’ was the secret to happiness

She was known as the godmother of punk who changed the fashion world forever, but Dame Vivienne Westwood’s personal life was just as colourful.

The designer, who has died in south London at the age of 81, leaves behind her third husband and creative partner Andreas Kronthaler, 56, after an unconventional relationship spanning more than 30 years.

Her third husband, and 25 years her junior, the pair met in 1988 at the Vienna School of Applied Arts where she was a 47-year-old professor and he was a student, aged 23.

Dame Vivienne spoke in the past how their professional partnership worked because her calmness balanced his ‘hysteria’, while she was happy for bisexual Kronthaler to have ‘total freedom’ in their marriage. 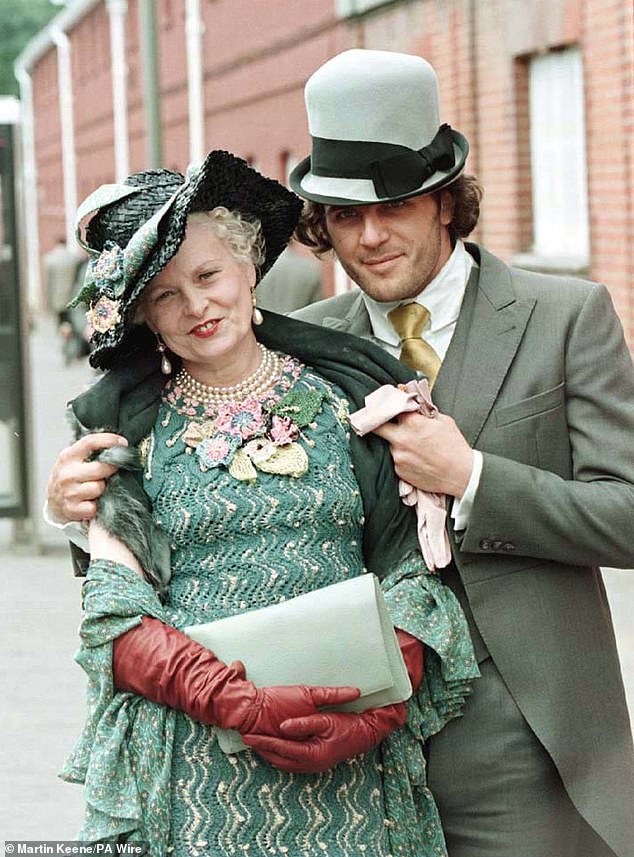 Andreas Kronthaler and Dame Vivienne Westwood at Royal Ascot in 1995. The couple were husband and wife as well as collaborative partners

Last night – following news of her death – he wrote: ‘I will continue with Vivienne in my heart.

‘We have been working until the end and she has given me plenty of things to get on with. Thank you darling.’

Andreas himself is Austrian – born in 1966 in Tyrol and the son of a blacksmith.

In 1980, he attended art school in Graz, Austria, where he spent five years training to be a jeweller.

But during this time, he also began to experiment with fashion, making clothes at home to be sold to friends and in local stores.

He studied Industrial Design at the Vienna School of Applied Art and switched to fashion design, where he met Vivienne. 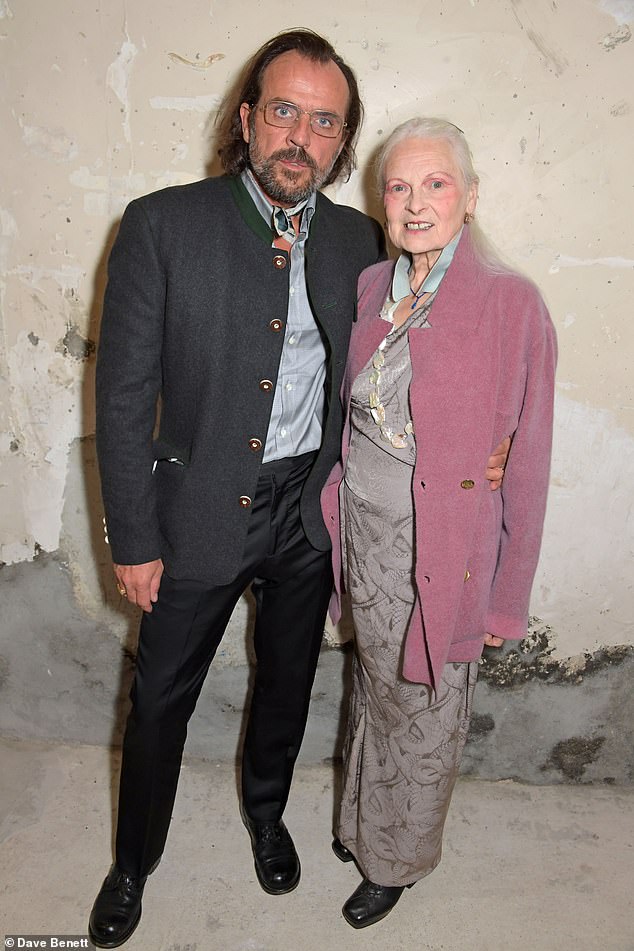 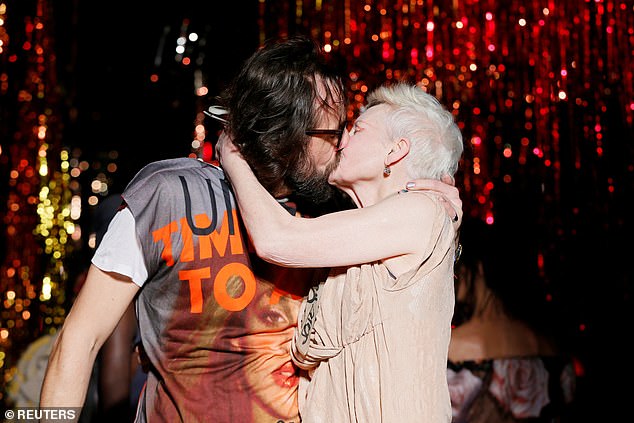 At the time, Andreas was just 23-years-old, while she was 47 and teaching three days a week.

But there was clearly something him that piqued her attention.

Dame Vivienne later told the Guardian, ‘It’s very difficult to find a student who you’d give a 100 out of a 100 – maybe it’s possible, but I haven’t met them yet.

‘But in the case of Andreas, he was completely off the scale.’

Over the course of the next year, Andreas created a series of dresses inspired by the Renaissance. Circular and over-length, they could be worn in numerous ways by incorporating a belt.

And clearly impressed, a year later, Dame Vivienne invited him to London to work for her firm. 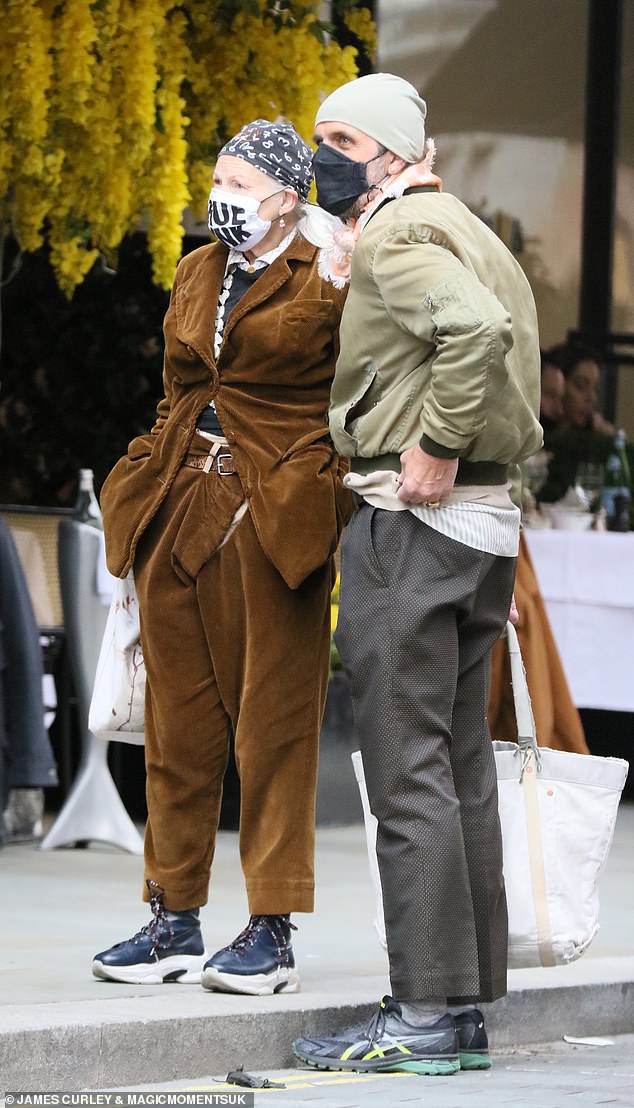 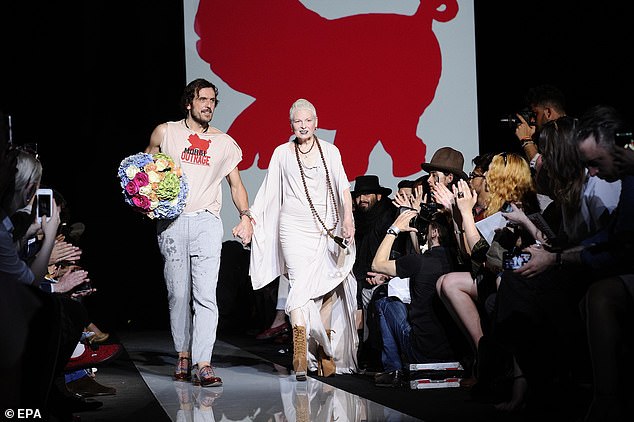 Their first joint collection was the Spring–Summer 1991 collection named Cut and Slash.

In this collection, Andreas presented a Renaissance-inspired gown that became known as the Sun Wheel dress.

Becoming romantically intertwined, the couple then married in 1993, a move which helped secure Andreas’ British visa.

In their domestic realm, Dame Vivienne apparently did the cooking, with Andreas telling the Guardian she was a ‘lovely cook but so bossy’. 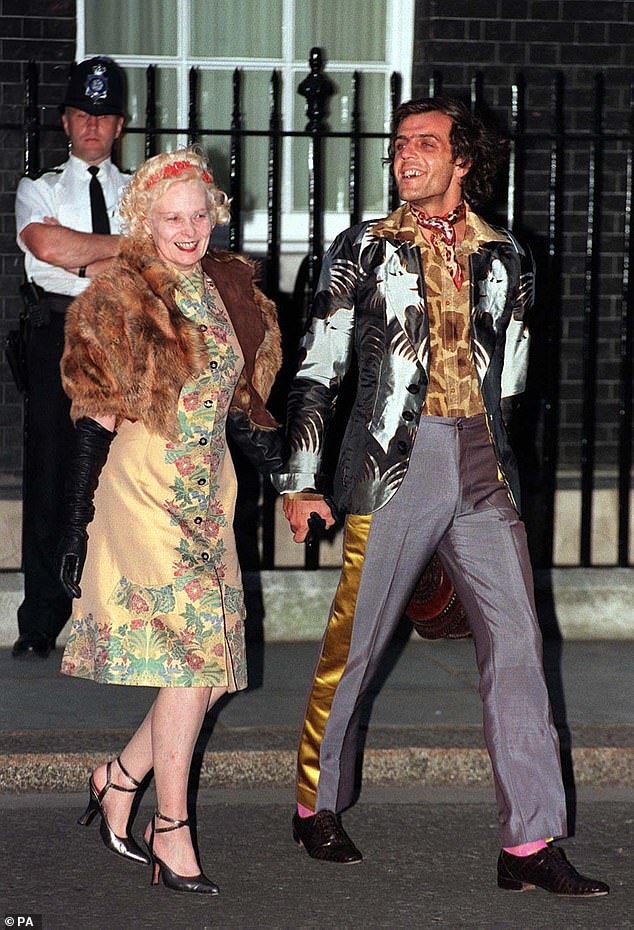 First couple of fashion! The pair attending a reception at Downing Street hosted by Tony Blair in 1997

He, on the other hand, did the housework as a way to relax.

He added that she knew that she loved him but didn’t need him as she was so independent.

He also told GQ how Vivienne used to look after him if he was ever ill.

He said: ‘She used to say, “Go and get the sherry out the garage.”

‘So I’d get a bottle of sherry and some ham and some cheese and a loaf of Hovis and I’d make a whole mountain of toasties. 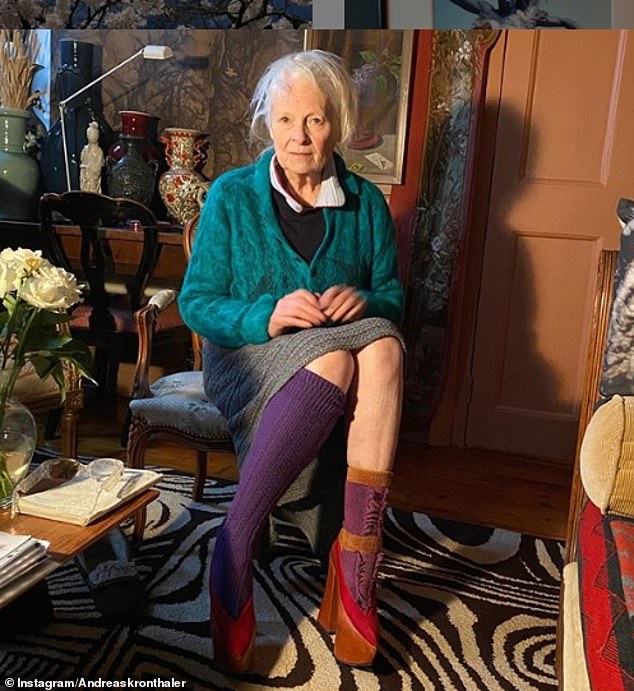 Lady of leisure: The designer’s living room is as eclectic you might expect, from the graphic rug to the Chinese porcelain. Dame Vivienne showcases a kooky outfit to complete the photo 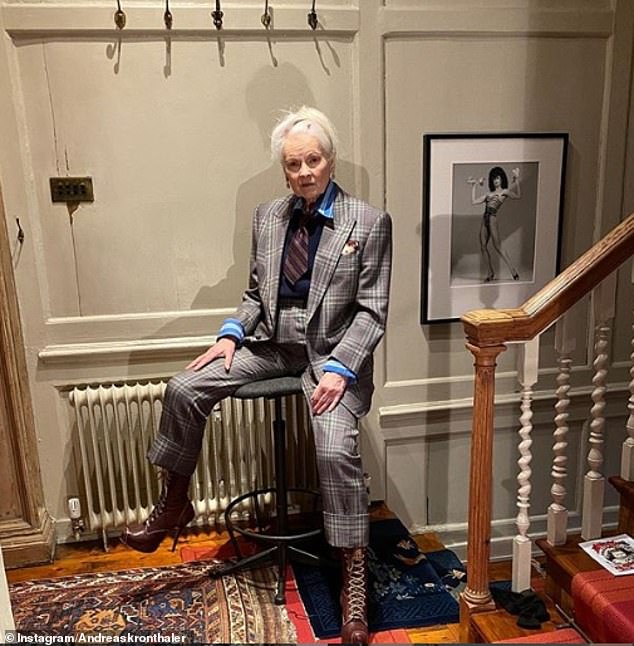 Check her out: Vivienne wears her ‘favourite suit’ in a photo taken in the entrance hall

‘Once a week we went down the pub. They loved her there. Really, they were looking for her whenever she came in. And, you know, she taught me a lot.’

In 2019, Andreas – who is thought to be bisexual – also revealed what kept their marriage strong.

He told the Evening Standard that the secret to marriage is not to ‘expect anything’ from your partner, saying of Dame Vivienne: ‘She never cared if I got pissed or went out. She wouldn’t even ask; she was never interested in these things, control. It was total freedom.

‘Maybe it was because she knew that I would come home and end up beside her. Perhaps I always just gave her this security, as well.’

And his wife awas in total agreement, telling the Telegraph, ‘I’ve never been interested – I’ve never worried – what he’s up to or anything. I let him go – not let him, I mean he goes – on holiday by himself.’

In their creative life, the couple also managed to make things work. 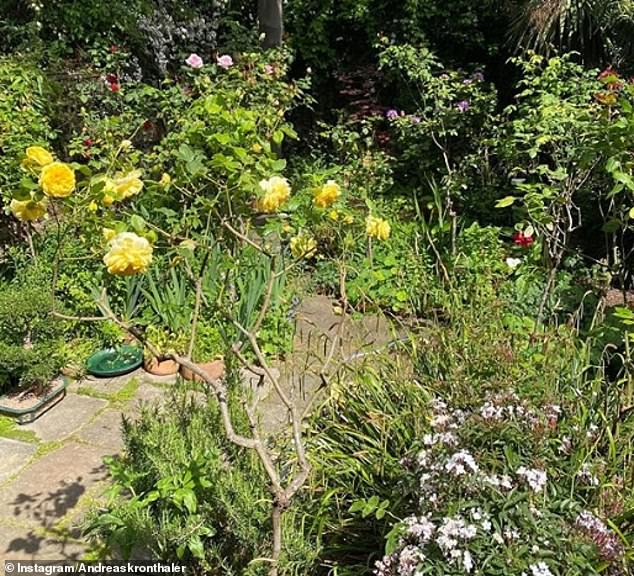 Personal oasis: Andreas has shared several photo of the garden, where they grow roses and jasmine, among other flowers. The overgrown plants give the illusion of a private jungle 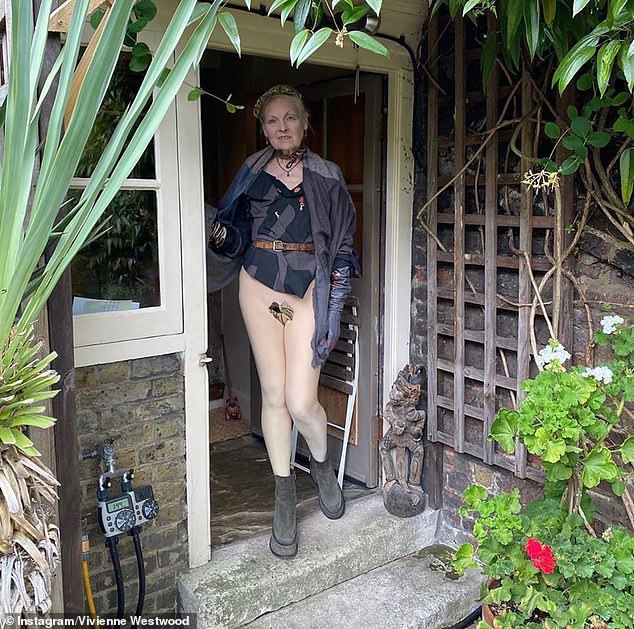 While Andreas was initially a silent design partner and creative director of her firm, in 2016 Westwood acknowledged his commitment and influence on the Gold Label collection by renaming the line Andreas Kronthaler for Vivienne Westwood.

Following Brexit in 2020, he used his design skills to explore his position as a European living and working in Britain.

Nowadays, he often posts about his work and life on Instagram to over 70,000 followers. 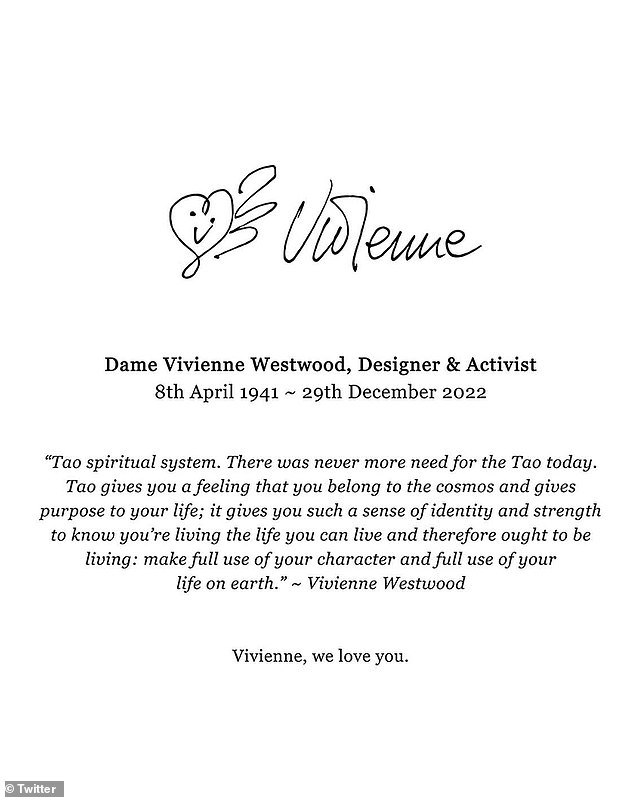 She died peacefully surrounded by her family in Clapham, South London , her fashion house revealed yesterday.

In 2020, he shared photos of their South London home, worth around £40 million, with a dated laundry room and overgrown garden.

The couple were also frequently spotted out together at fashion events and on London dates.

Dame Vivienne was an icon.. whose clothes were a vessel for her politics