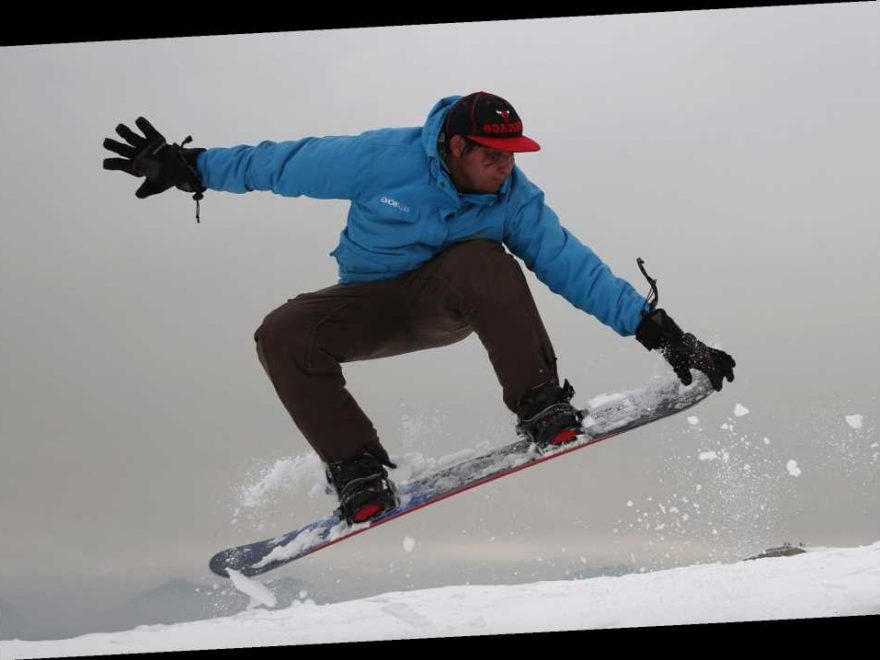 While Afghanistan’s capital may seem an unlikely destination for snowboarders, a group of young Afghans is looking to put the city on the winter sports map and change perceptions about their war-weary nation.

Kabul is better known for its hulking concrete blast walls and tense security checkpoints. But it also sits in a valley in the Hindu Kush mountains at an elevation of around 5,900 feet. The rugged terrain has inspired young Afghans to take to the surrounding mountains in search of fun.

Ahmad Romal Hayat, 22, who founded the Afghanistan Snowboarding Federation, said that even a country plagued by war and sectarian conflict can have room for sports.

“We started doing it (snowboarding) to show this new face to the world,” said Hayat.

As a teenager, he started out on a skateboard. Later, he bought a snowboard in neighboring Iran and taught himself how to ride it. Hayat said he’s the first person to bring a snowboard into Afghanistan, and the first to try it there.

These days, he and a handful of federation members hit the slopes outside Kabul each weekend, usually with around a dozen male and female students and plenty of spectators. They come for the free training on a snowy hillside west of the capital, often shrouded in pale grey mist.

The mountain, known as Kohe Koregh, was used by the Afghan mujaheddin, or holy warriors, to rain artillery and rockets down on Kabul during the Afghan civil war in the 1990s.

Now, it’s a place for laughing kids who sled on plastic bags, while Hayat’s team members work on improving their snowboarding skills on about 60 centimeters (2 feet) of snow.

They still have to share snowboards, and the hill has no lift facility. That means they’ve got to hike back up to the top after each run — a tiring process.

While climbing back up the hill, Karim Faizi described his path to becoming a snowboarding instructor. He fled Afghanistan in 2016 to escape the almost two-decade-old war between the U.S. and Taliban militants.

He ended up seeking asylum in Germany where he fell in love with snowboarding. In 2018, he returned to Afghanistan, saying he did so without awaiting a final decision on his asylum case.

Now he is worried about the future.

“If the Taliban come back, it’ll be impossible to keep snowboarding, because the Taliban are not sports-friendly people. They want neither peace nor sports,” he said. A few sports, like soccer and wrestling, were allowed during the Taliban’s harsh religious rule from 1996 to 2001.

Fighting between the Taliban on one side and the United States and its Afghan government allies on the other has continued to rage, even as the U.S. works to hammer out a peace agreement with the insurgent group. The U.S. and the Taliban are negotiating a reduction in hostilities or a cease-fire to allow the signing of a peace agreement. That deal would open the way to a broader post-war agreement for Afghans, and allow for the withdrawal of most, if not all, U.S. and coalition forces.

The country’s post-war future and the role of the Taliban remains unclear. The Taliban currently control or hold sway over around half the country.

Right now, the only places with enough security to offer winter sports activities are in Kabul and the central province of Bamiyan. Hayat said skiers and snowboarders haven’t been able to explore mountains with great potential in Ghazni and Wardak provinces southwest of the capital because the Taliban hold those areas.

Bamiyan province is infamous for once being home to two massive 1,500-year-old statues of Buddha carved into a mountain, which the Taliban blew up in 2001.

But Bamiyan also hosts a skiing competition each year, and the country’s small snowboarding community is set to travel there for an indoor competition on Saturday. They’re also heading east to neighboring Pakistan’s picturesque Swat valley later this month to take part in an outdoor competition.

Hayat has registered the Afghan chapter with the International Snowboard Federation, although the Afghan government offers no financial support. Faizi said he dreams of returning to train in Germany, and to one day represent Afghanistan in the Winter Olympics.

But back on the slopes of Kohe Koregh, some young Afghans were excited to simply get their first taste of snowboarding.

Zahra Hakimi, 16, is a member of the minority Hazara ethnic group. She came with friends to watch the snowboarders. She and another friend eventually decided to give it a shot.

At first, Hakimi struggled to keep her balance, but eventually managed to go 10 meters (around 30 feet) at a time without falling.

“When I see how crazy people are for this sport — girls and boys trying, falling down again and again but still keep doing it — I really believe it has a bright future,” she said.