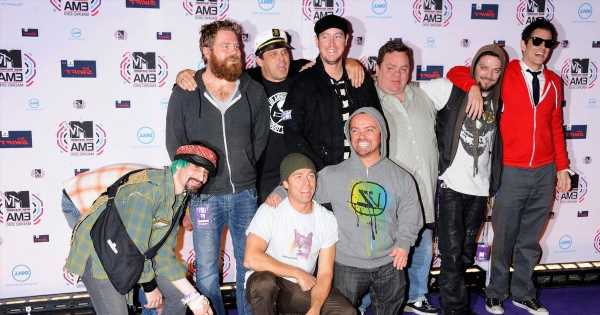 It has been 20 years since the release of the first Jackass movie – marking the controversial comedy show's step from MTV to worldwide superstardom.

From the moment the show debuted in 2000, to the 2002 film and beyond, people couldn’t believe it was allowed to be on air, but it soon amassed a huge cult following.

The show followed members of the crew taking part in embarrassing and sometimes dangerous skits and pranks that had viewers in stitches.

There was a lot of vomiting, injuries and poo during the show's iconic stint on television and in cinemas but this hasn’t stopped it from being a significant part of American pop culture.

Discussing the show, then MTV President Van Toffler said: "We just knew there were a bunch of knuckleheads out there who had a very high tolerance for stupidity and pain."

Two decades on, the stars of the show have gone on to appear on other programmes and have their own spin-offs, with many re-uniting for the 2022 release Jackass Forever.

Let's start with the main man – as, without Johnny Knoxville, there would be no Jackass.

As well as being the creative genius behind the show, Knoxville, now 51, is responsible for many of the most iconic stunts to grace our screens.

The father of three has also built a strong background acting, appearing in Coyote Ugly, Men in Black II, The Dukes of Hazards, Bad Grampa and plenty more in the years after the original Jackass run came to an end.

Knoxville was the writer and producer of the 2018 comedy film Action Point and reprised his starring role in the fourth Jackass movie, which was released in February of this year.

He is married to longtime girlfriend Naomi Nelson and they have two children together. He also has a daughter from a previous marriage to fashion designer Melanie Lynn Cates.

Former professional snowboarder Dave England was one of the show's most notorious stars, given his 'unique' skill set. Left with only one tescticle following a snowboarding accident, he attached a leech to his scrotum in the second Jackass film, but it was his bowel movements that were most famous.

England claimed he was the "world's first professional s***ter" because he gets paid to poo on TV and that he is the only person in the world who can defecate on command.

In one of his most disgusting stunts that almost didn’t make it to TV, he got a baby's nappy out of a bin and started eating from it.

The stuntman and father of four appeared in the Jackass series and films and has also featured on WWE SmackDown, Ridiculousness, and more.

He's married to Shawna England and he shares a mix of Jackass and family posts on his Instagram.

Before Jackass, McGhehey was also a professional snowboarder like England but was forced to retire early after breaking his neck.

Better known as Danger Ehren, he gained a daredevil reputation as he’s known for always getting injured and losing his teeth while filming stunts.

One of his most outrageous pranks, 'Terror Taxi', came at the end of Jackass Number Two.

McGhehey played a terrorist passenger in a taxi and he unknowingly wore a "pube beard" made up from the shaved pubic hair of his co-stars and crew members.

He is famously the butt of the jokes in Jackass and discussed his role in a podcast with fellow star Steve-O.

McGhehey also became a father in 2021 to baby Cedar Moon.

Considered to be one of the most daring members of the group due to some of his outrageous stunts is Stephen Gilchrist Glover, best known as Steve-O.

He was an instant hit on the show but has found himself in trouble in the past over his pranks. He was arrested for stapling his scrotum to his leg and in a separate incident for urinating on potato chips in public during a concert.

On his first appearance of Jackass, he was supposed to dive into elephant poo but on the way to the stunt, his car broke down in a pet store parking lot. Instead, he got a goldfish, which he swallowed, as an improvisation.

After the show, he starred in a spin-off called Wildboyz for four seasons and had his own Dr Steven-O where he tried to help men overcome their fears.

He also appeared in the original version of Love Island in 2006 but left after rowing with producers. He is said to have become “emotional” after his requests for more beer and chocolate were ignored.

Following that, he appeared on Dancing With the Stars and Channel 4's The Jump in 2014 where he met Stacey Solomon. The pair became a surprise couple but split after six months as they couldn't make the long-distance relationship work. He is now engaged to Lux Wright.

Steve-O’s career was marked by alcohol and drug addiction throughout his time on the series and the first two Jackass movies. He has since quit alcohol and drugs but he has “never stopped being crazy,” according to his website.

It reads: “Steve-O has never stopped being wild and crazy, but he’s definitely evolved. He’s been clean and sober for over twelve years now, and developed a genuine love for animals (including the four dogs, two cats, and three goats he and Lux have rescued). Steve-O and Lux have plans to start their own animal sanctuary.”

He also has a YouTube channel which has amassed more than 6 million subscribers.

Brandon was nicknamed Bam by his granddad because he gained the habit of running into the walls at the age of three. The skateboarder, TV and radio personality was part of a group called CKY along with longtime friend Ryan Dunn, with both of them joining Jackass after their videos went viral.

After Jackass, he was given his own MTV series entitled "Viva La Bam'' which ran for five seasons between 2003 and 2005. The show followed Margera, his family and friends as they performed various stunts and missions.

He has also been involved in other Jackass spin-offs including Bam's Unholy Union, Bam's World Domination, and Bam's Bad Ass Game Show.

Bam, who boasts 2 million Instagram followers, is married to model Nicole Boyd and they have a son together called Phoenix.

He has struggled with his mental health and addiction but he is now receiving treatment, it was announced on his Instagram page.

His family, who are managing his page, wrote: “It’s no secret that Bam has struggled with mental health and addiction. You’ve watched Bam grow up and supported him through his ups and downs. Our family has let you into the chaos that is our home, and we want nothing more than to continue this journey together.

“Despite rumours, Bam has never been in a conservatorship but rather a temporary healthcare guardianship for reasons not shared with the public. If Bam chooses to speak to this, he will when he is ready. The ‘Free Bam’ theorists have encouraged his exit from treatment, despite their lacking knowledge of the details, his health, and well-being.

“We kindly ask you to respect the process and our family. As our extended family. We ask for you to support Bam in his recovery, to stay on track, and wish him well with his sobriety. With heart, The Margera Family.” Pontius, who was with Jackass from the very first episode, was known as Party Boy and Pontius the Barbarian. He has appeared in Charlie’s Angels: Full Throttle, National Lampoon’s TV: The Movie and What We Do Is Secret.

While on Jackass, his trademark style was either a male pouch thong and a bow tie, or a headband and belt – being otherwise nude. He used to perform stunts involving his penis, one of them being getting bitten by a snake and another, flying an RC helicopter with his penis by tying thread around it.

Pontius joined Steve-O for the spin-off series Wildboyz and again his penis was put on the line for the sake of the gag. He also featured in the latest Jackass movie.

Boasting over 1.5 million followers on Instagram, he shares sweet snaps with his daughter and of course, Jackass pictures. He still embraces his nickname Party Boy.

Known as Wee Man, Jason Acuña is a professional skateboarder and one of Jackass' most iconic stars. Some of his stunts on the show have included skating as an Oompa-Loompa, kicking himself in the head and doing deep-knee bends with basketball legend Shaquille O'Neal on his back.

Acuña, who is also in the new movie, was born in Italy but was raised in America and has achondroplasia, a form of dwarfism.

Away from acting, he is the host of Fox Sports Net's skateboarding show 54321 and he was an investor in the Chronic Tacos chain of Mexican restaurants and opened his first franchise in California in 2010.

He boasts a following of 1.3 million online and shares snippets of his life with fans like his fearless pals.

Lacy was brought on the show as a writer and he is responsible for scripting most of the cast's memorable pranks. However, he was convinced by Knoxville to take part in the wild stunts on camera.

One of the commercial actor’s funniest skits involves him chasing after Wee Man down the street in just a pair of tight white pants.

He can also be remembered for the "Eggnog Challenge" for the Jackass Christmas Special where he had to drink 50 shots of eggnog in an hour.

Lacy, who looked furious throughout the entire skit, took it very slow but ended up passing out after 31 shots.

While he was involved in the new movie, he has also been touring festivals, clubs, and bars around America doing stand-up. Lacy has also featured on Steve-O’s podcast.

Ryan Dunn, who was a member of the CKY crew along with Bam Margera, rose to fame in the late 1990s. The pair performed extreme stunts and pranks and recorded them on video, which led to the rise of Jackass.

Dunn died when he was only 34 years old after he crashed his Porsche into a tree while drunk driving on June 20, 2011.

He was accompanied by Zachary Hartwell, the assistant producer from Jackass Two. They both died at the scene.

Dunn had shared a picture of the two drinking in West Chester Bar hours before the accident and it was reported that the car was going 132-140mph.

In Jackass Forever, released earlier this year, a tribute was paid to Dunn.