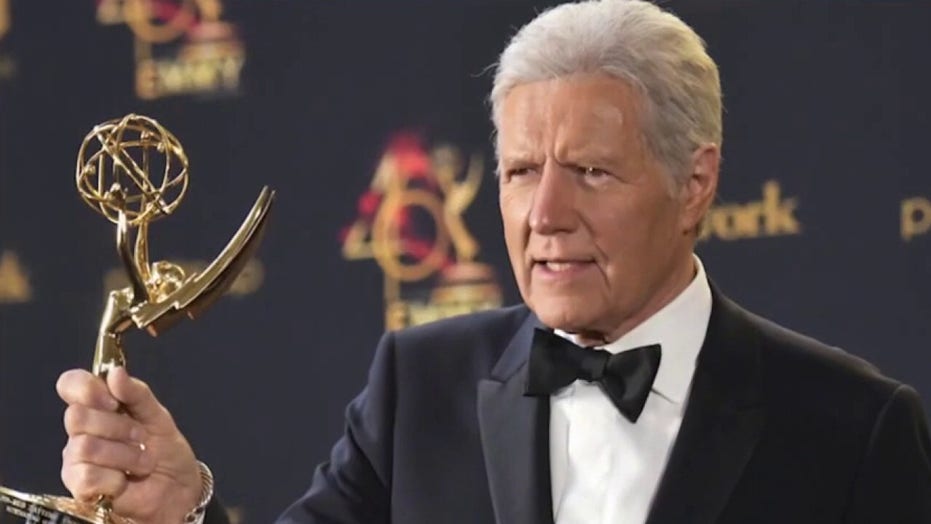 Who will replace Alex Trebek as ‘Jeopardy!’ host?

Gutfeld: Who should be the next host of ‘Jeopardy!’

“Who is Mike Richards?”

It’s the question on the minds of “Jeopardy!” fans after a report claimed the long-running game show’s executive producer might be taking over the show as its permanent host to replace the late Alex Trebek. Variety exclusively reported that the 46-year-old is in “advanced negotiations” with Sony Pictures Television to host the beloved trivia show.

After long speculation about who would take over the place on the podium, many avid watchers and loyal fans of the show, which has had over 8,200 episodes and 37 seasons, have expressed surprise that Richards beat out all the big-name contenders, including fan-favorites Ken Jennings and LeVar Burton, who only got one week of hosting duties.

Richards, who just joined the production last year as EP, had reportedly impressed Sony with his “command of the fast-paced game and easy on-air manner” when he guest-hosted in late February, according to Variety. Sony previously declined to comment to The Post regarding a permanent “Jeopardy!” host. 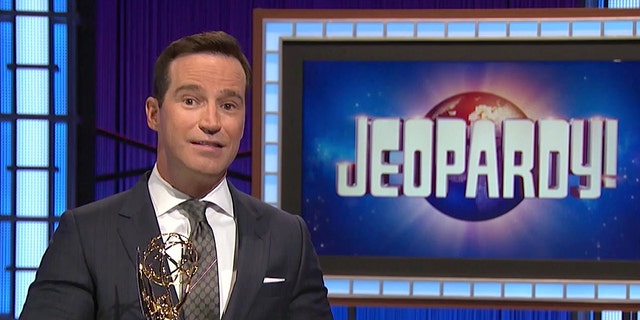 But Richards may not be the official quiz czar, according to Sony Pictures, which told Variety that discussions were ongoing with several potential candidates. A source close to the hiring process revealed that there is no certainty that the sides will close a deal despite Richards being the alleged front-runner.

Since Trebek’s November death at age 80 following a battle with pancreatic cancer, many fans assumed that “Jeopardy!” GOAT Jennings — the show’s highest-winning contestant, with $2.52 million in regular gameplay winnings — would get the position, especially given he was made a consulting producer for the series before Trebek’s passing.

Jennings, a longtime friend of Trebek’s thanks to countless hours spent on the show together, was the first host to helm the podium and his hosting debut was an emotional one.

“I miss Alex. Sharing this stage with Alex Trebek was one of the greatest honors of my life,” Jennings said during the show’s opening while holding back tears.

But despite Jennings’ forever association with the show as the GOAT — or even Burton’s rabid fan base who helped him cinch the gig — Richards might just have the hosting spot in the bag.

Here are some key facts about the potential new show host.

Who is Mike Richards and what other game shows has he hosted?

Richards is a native of Burbank, Calif., and seemed to always have ambitions for game shows. As a student at Malibu’s Pepperdine University, Richards wrote, produced and hosted a weekly late-night comedy talk show called “The Randumb Show,” which won multiple college broadcasting awards, according to his official bio.

In 2018, Richards reflected on the early days of his career on Instagram, calling himself the “#hungriestguyintheroom.” “21 years ago (almost to the day) I stared at this historic stage with pictures of my TV heroes on it and interviewed to be an intern on ‘The Tonight Show with Jay Leno,'” he wrote. “I got the internship, which turned into a Production Assistant job…which lead to where I am now. My dream was to work anywhere in TV…my stated goal was to Executive Produce and host a show I created. Just shot a pilot presentation I co-created next door to this stage. I got to host it and was the EP. I was so hungry to be a part of all of this back then and the more I get to do it, the hungrier I get…I mean that literally and figuratively, I am ready for lunch in this pic!”

He indeed went on to host many a game show before executive producing “Jeopardy!” In 2007, according to Variety, he was considered for hosting “The Price Is Right,” which would go to Drew Carey. However, he did join the price-guessing program as a co-executive producer, as well as a production role in “Let’s Make a Deal.” Richards also hosted the Ashton Kutcher-produced WB reality competition show “Beauty and the Geek” and the REELZ Channel entertainment news outlet “Dailies.”

Richards also executive produced the celebrity edition of “Who Wants to Be a Millionaire,” teaming up with host Jimmy Kimmel. He then succeeded Harry Friedman as executive producer of “Wheel of Fortune” and “Jeopardy!” for the 2020-2021 season.

While he’s largely private about his personal life on social media, Parade reported that he is married to Stephanie Richards and has two sons. He joked in an Instagram hashtag that he named his son after Johnny Carson.

Why Mike Richards as ‘Jeopardy!’ host?

It’s easy to see why Sony Pictures would love Richards for his demonstrated knowledge of game flow and ability to make the hosting gig feel easy. Before jumping into the “Jeopardy!” position, Richards had produced more than 4,000 hours of game shows.

Richards has been nominated for 17 Daytime Emmy Awards and won three for “The Price Is Right” in the Outstanding Game Show category. He also worked closely with radio and television personality Dick Clark as a vice president of development and specifically produced several awards shows and prime-time shows. He was also a correspondent on the “American Music Awards” and “Primetime New Year’s Rockin’ Eve.”

Richards also has experience as a stand-up comedian, a path he took after graduating college, which could add a more light-hearted tone to the show.

What was his relationship with Alex Trebek?

Along with Jennings, Richards was also applauded for his heartwarming tribute to Trebek after news of his passing. Fans also appreciated his ability to keep the game moving, his charisma and his dedication to continuing Trebek’s truly missed legacy.

In February, before his hosting gig, he posted a heartwarming tribute to Clark, Trebek and others who came before him.

“I’ve been asked a lot about how I felt filling in as host of Jeopardy!” he wrote on Instagram. “I envision this billboard of Alex outside of our studio. It’s more than two stories high and yet he was even bigger than that with his wit, charm and generosity. I thought about what he told me, ‘the contestants are the stars of Jeopardy!’. I thought about every great teacher who challenged me to be better. I thought about my first mentor Dick Clark. I was the VP of his company when I got the Beauty and the Geek hosting job. I was concerned about producing for him and hosting at the same time. He told me ‘I’ve done it my entire life, you’ll be great.’ I thought about how much I love this game and the fact that it promotes kindness, intelligence and fair play. And as I prepared to step up to the lectern I thought, what an honor.” 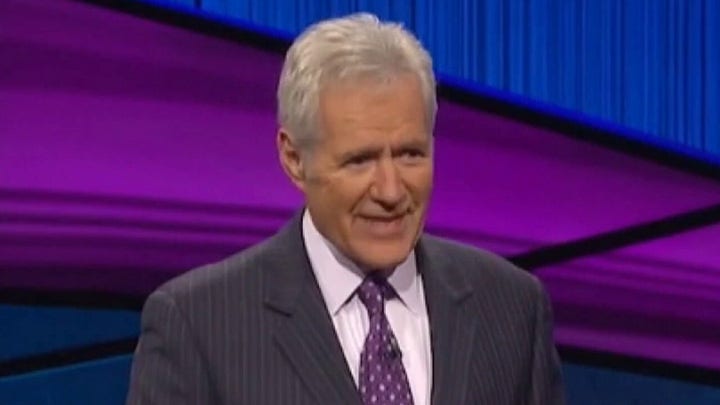 “It’s not a decision that would be up to me, and I would not make myself available to presenting an opinion,” Trebek told TVLine. “I would leave it up to the people in charge.”

But that didn’t stop Trebek from offering a “dream pick.”

“When people ask me who I’d like to see replace me, I say, ‘Well, it’s probably going to be a woman, and she’ll have to be bright, she’ll have to have a good sense of humor…’ Uhhhh, let’s see…. Betty White! Betty White is my choice,” he said.

How did fans like Mike Richards when he hosted ‘Jeopardy!’?

According to a OnePoll survey, Richards was the second choice for permanent host behind Jennings, who garnered 23% of the vote. The poll surveyed 1,003 Americans from across the country during the month of July. While Richards earned 14% of the vote, “Star Trek” actor LeVar Burton got 10% — which may come as a disappointment for fans of the “Reading Rainbow” host.

In a Newsweek interview from April, Burton said, “I think I could continue his legacy, I think I would do it proud. Yeah, I think I would bring myself and my skills and my life experience. I believe that I will be honoring Alex’s legacy by standing on the podium.”

One fan reacted, “YALL COULD HAVE A WHOLE ICONIC LEVAR BURTON BUT YOU PICKING CHAD MCWHITERSON FOR… WHAT???”

“Levar Burton was given 1 week, instead of the 2 weeks every other guest host had. And, his week was during the Olympics, so preempted in a lot of places. This choice is disappointing but not surprising,” said another.

A third stated, “LeVar Burton > who TF is Mike Richards.”

And in a hilarious tweet gaining almost 3,000 likes, one user quipped, “This guy might be the perfect pick because he’s already got everyone responding ‘Who is Mike Richards?'”