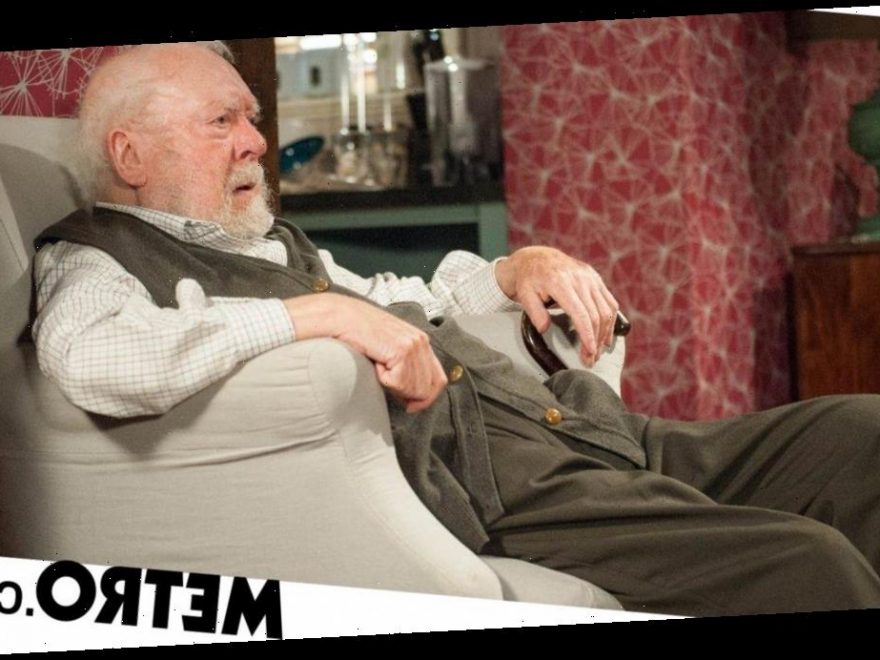 Laurel Thomas (Charlotte Bellamy) will discover the devastating news in Emmerdale tonight that her father-in-law, Sandy Thomas, has passed away.

The news of Sandy’s death with have consequences for both Laurel and Arthur (Alfie Clarke), as they not only come to terms with their loss but face the truth behind recent events in the village, too.

Sandy was last seen on Emmerdale via video call last year as he updated his loved ones in the Woolpack about his adventures in Australia, but who was Sandy and which actor played the characters in the show?

Who was Sandy in Emmerdale?

Sandy Thomas first appeared on Emmerdale in November 2005 as the father of Luke Thomas and vicar Ashley Thomas.

Married to Dorothy Thomas until her terminal cancer diagnosis spelled her tragic and untimely death, Sandy’s decision to help her die towards the end of her life was a bone of contention between Sandy and Ashley.

One of the most memorable storylines involving Sandy was centered on the death of his son Ashley, who had been battling vascular dementia. The father and son were also at the center of an elder abuse storyline in 2012.

Sandy left the soap in 2018 to start a new life abroad. His final appearance on Emmerdale saw him Skype home with a drink in hand last year to speak to his loved ones and share his new found joy at life abroad in Australia.

Who played Sandy Thomas in Emmerdale?

Sandy Thomas was played by actor Freddie Jones since the character’s first appearance in November 2005.

Frederick (Freddie) Charles Jones was born in Stoke-on-Trent in 1927 and first appeared on TV in 1960.

Over the course of his nearly 60 year career, Freddie appeared in numerous TV shows, films and TV Movies.

His 13 year stint playing Sandy Thomas in Emmerdale was by far his longest running role in any TV series and it was also his last acting role before he retired in 2018.

Freddie died in July last year at the age of 91 after a ‘short illness’.

Charlotte Bellamy, who plays Laurel in Emmerdale, said following Freddie’s death: ‘We have heard today the wonderful Freddie Jones has passed away. He was 91 years old. I was lucky enough to work with Freddie for over 13 yrs when I played his daughter in law, I was in awe of his professionalism, humour and his zest for life.

‘He spent his last working years here at Emmerdale where he was loved and respected by us all. The world is a poorer place without him.’