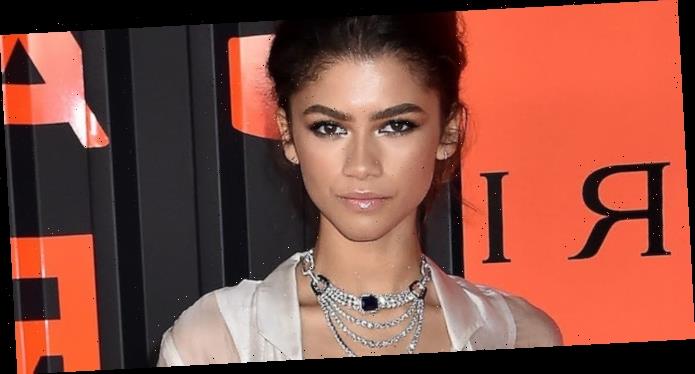 Zendaya is embracing one of the biggest celebrity fashion trends of the moment: sheer clothing.

She attended the launch of Bvlgari's B.zero1 Rock collection in New York City on Thursday, and walked the red carpet in Rahul Mishra Couture. Her sheer, long-sleeved shirtdress had a plunging neckline, as well as a silk belt tied around the waist. The organza dress was adorned with structural details that looked like rows of white leaves.

For pants, Zendaya donned a black pair of wide-legged trousers.

Though she opted for minimal makeup and a simple hairstyle for the red-carpet appearance, Zendaya did wear one standout accessory: a Bvlgari necklace.

Called "The Star of Venice," the diamond necklace was inspired by the annual Venice Film Festival. It took 1,100 hours to create, according to the Bvlgari website, and features a 23.67 carat royal-blue sapphire. It's unclear how much the piece is worth, but Insider has reached out to Bvlgari for comment.

Bvlgari recently named the actress as a brand ambassador alongside Naomi Scott, Kris Wu, and Lily Aldridge. Speaking to Women's Wear Daily, the brand's chief executive officer Jean-Christophe Babin said Zendaya was chosen because she has a youthful spirit.

"We decided for the first time to have a man as the protagonist for this campaign and had gone through a roster of very complementary talents," he told WWD. "Zendaya is epitomizing the Generation-Z spirit, Naomi Scott is British and Indian — it's this combination that is evidence of the diversity of Bulgari. It's not a brand only for Americans or Chinese. It's a global economy with global diversity and we are acknowledging the universal appeal of the brand."

Zendaya recently wore another bold outfit on the red carpet. She attended the AAA Art Awards in New York City on January 30, where she wore a $1,035 Christopher Esber dress with daring cutouts across the waist. It also had giant pockets on its skirt, and two split sleeves.

Representatives for Rahul Mishra Couture did not immediately respond to Insider's request for comment.